‘FILMED ON ACTUAL LOCATIONS WHERE IT COULD HAVE HAPPENED!’ 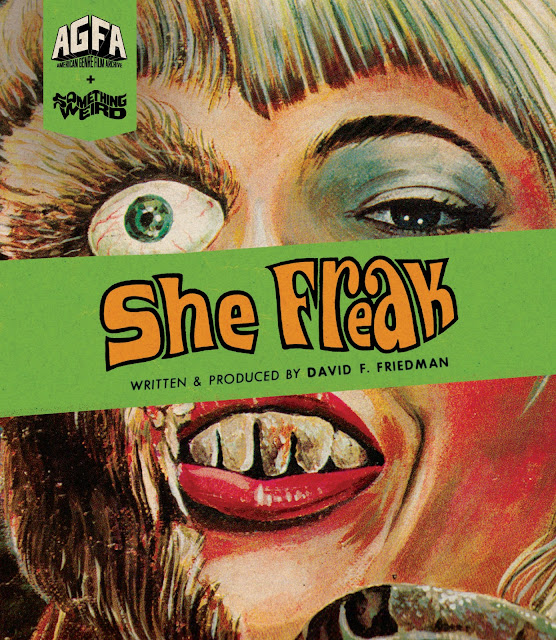 A grimy exploitation retelling of Tod Browning's Freaks (1932), She Freak (1967) is one of the best carnival-centric films ever made, and in my view the best film which producer David F. Friedman attached his name to after his split with legendary gore pioneer Herschell Gordon Lewis. While Lewis hailed from a Chicago advertising background, Friedman had gained his experience in a genuine carnival environment, and his affection for the carnie lifestyle clearly shows in this film (which he both produced and wrote, as well as briefly appearing as a carnival barker/ticket seller).

Even before the opening credits to She Freak roll, we are treated to a wonderful five-minute montage of authentic carnival footage, which Friedman and director Bryon Mabe filmed on a handheld Arriflex during a day trip to the California State Fair in Sacramento. This footage really sets the ambience for She Freak’s sleazy tale of beautiful but bored white trash princess Jade Cochran (played so convincingly by Claire Brennan), who quits her job at a greasy middle-of-nowhere diner and runs off with the carnival that comes traveling through town. Making friends with the carnival’s sexy stripper, Pat Mullins (Lynn Courtney), Jade quickly works her way up from serving hot dogs at the food stand to walking down the aisle with Steve St. John, the well-off but rather boring owner of the sideshow attraction (played by Bill McKinney, who later made Ned Beatty squeal like a pig in 1972's Deliverance). 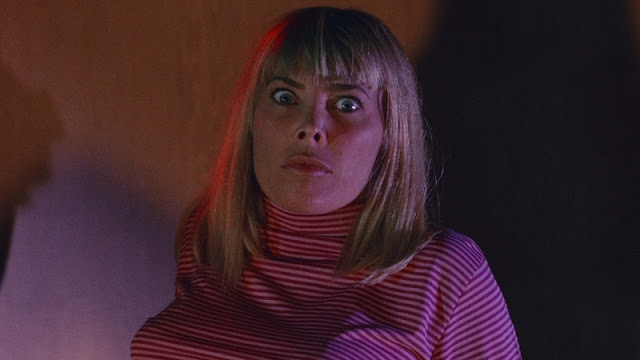 Jade doesn’t let a little thing like marriage stop her from continuing a torrid affair with Blackie (Lee Raymond), the ruggedly handsome Ferris wheel operator. Her spiteful side starts to show itself in the way she treats Shorty, the carnival’s little person who knows the secret of her late-night trysts in Blackie’s trailer. When Steve catches his wife and Blackie in the act, he is taken out by a knife to the stomach, leaving Jade to inherit the sideshow. She starts snubbing former close co-workers and immediately begins to instigate unwanted changes, such of the sacking of the much-loved Shorty. Just like the climax of Freaks, Jade ends up paying dearly for her treatment of those around her, as a shiv-wielding Shorty and the sideshow freaks, toward whom Jade had always shown revulsion, converge on her and transform her into the show’s latest attraction, a hideous beast woman put on display in a pit of snakes. 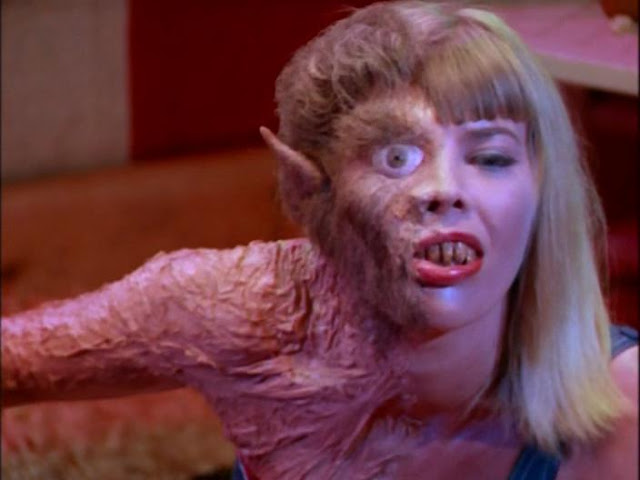 She Freak is a remarkable film on so many levels. The authentic carnival footage is obviously one of its main assets - it helps give the low-budget (around US $65,000) movie a sense of scope and scale, and serves as a wonderful and important time capsule of the American traveling carnival and sideshow as it was at that particular moment in time (footage from She Freak has turned up in numerous documentaries on the subject). The colour photography really gives the film a rich and gaudy ambience, and there are certain moments, particularly those between Jade and Blackie in his grotty trailer, which look like the cover art of a vintage adult paperback come to life. There’s no nudity and only a small smattering of blood, but it’s still one of the classic exploitation flicks of its era, and it enjoyed a solid run of the grindhouse and drive-in circuits, where it did the rounds for several years.

Despite the film’s lack of skin, Claire Brennan still manages to project a teasing and raw sensuality. There are a some terrifically framed shots which capture her at various times throughout the movie - particularly effective are an early shot of her standing at the door of the diner she works for, the sunlight providing a clear suggestion of the form which lies under her uniform, and a very Russ Meyer-esque shot of her framed in a low angle shot between the tight-jeaned crotch of Blackie. Brennan was in her early-thirties when she played the role of Jade, something which I think helped project the character’s sense of wanting something a bit better from life before it’s too late. Tragically, she died of cancer not long after the film was released, at the age of only 43. She looks amazing in She Freak, strutting about the carnival in pink tights and matching sleeveless blouse. Among her other credits were the 1961 prohibition-set sexploitation flick The Touchables, appearances on numerous episodic television shows (including Gunsmoke, S.W.A.T. and The Streets of San Francisco), and a bit part in the 1977 Gene Hackman film The Domino Principle. Her last known appearance was as Carolina Moon in Robert Aldrich’s The Choirboys (1977). 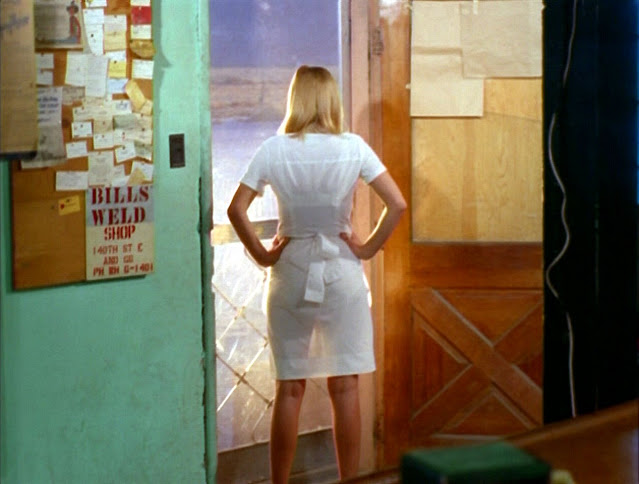 Elsewhere in the film’s cast we have Felix Silla as Shorty, and Ben Moore as a carnival advance man. Silla’s most famous role was as Cousin Itt in the original Addams Family television show (1964 - 1966), as well as Twiki the robot (voiced by Mel Blanc) on Buck Rogers in the 25th Century (1979 - 1981). He was also an Ewok, and played the child ape who spots Carlton Heston sneaking through a simian funeral in Planet of the Apes (1968). Rumours circulated for years that Silla and Brennan had a love affair in real-life, and that she had even fathered his child! Fans of Herschell Gordon Lewis will recognize Ben Moore from the classic Two Thousand Maniacs! (1964) and the lurid partner-swapping drama Suburban Roulette (1968). No genuine human oddities were featured in the movie - the freaks were all created with make-up that is rather minimal, but made effective by mood and some creative colour filters. The final make-up used to transform Jade into a freak is a classic piece of exploitation design (courtesy of low-budget make-up artist extraordinaire, Harry Thomas), and made for a memorable image on the film’s poster and publicity material (it also graced the front cover of issue number 34 - June 1974 - of the classic newspaper-format monster magazine The Monster Times). 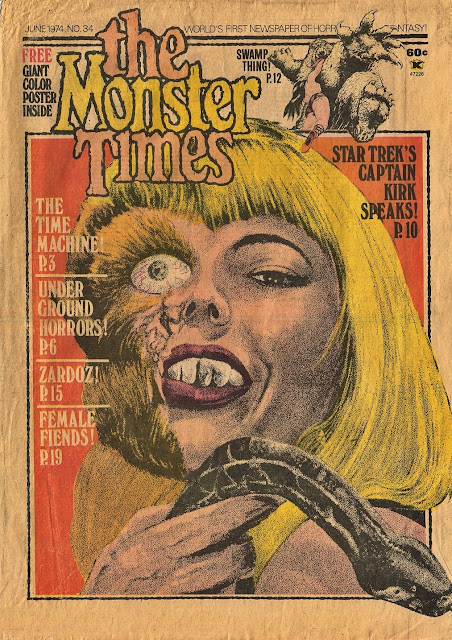 Also released, briefly and without Friedman’s permission, as Asylum of the Insane (with unrelated 3D footage attached), She-Freak appeared on VHS through several labels during the 1980s and 90s, including Magnum and Something Weird, before the later issued it on DVD in 2000, in a nice special edition which featured an audio commentary from Friedman, along with the original trailer and a collection of rare archival black & white carnival footage from the 1930s (with sound). The DVD was also included in Something Weird’s four-pack ‘Freak Show’ box set from 2004, a release which also included Brad Grinter’s Blood Freak (1972), Frankenstein’s Castle of Freaks (1974), and Basket Case (1982).

And now, somewhat unbelievably, She Freak has arrived on Blu-ray, in a stunning release from AGFA (American Genre Film Archive) and Something Weird. While the film already looked amazing on DVD, the 4K restoration on the Blu-ray, struck from the original 35mm camera negative, gives the film a whole new level of lurid lushness. Simply put, the movie pops as never before, and the image so clear and immersive that you can almost smell the axle grease on the ferris wheel during its opening moments. Apart from its visual sharpness, the Blu-ray print also helps to highlight the film’s interesting (and at times very ambient) score, composed by Friedman regular William Allen Castleman under his Billy Allen pseudonym.

Special Features on the Blu-ray include an archival commentary from producer Friedman and Something Weird founder Mike Vraney (both now sadly deceased, the commentary is ported over from the old DVD release). There is also a feature-length compilation of classic Friedman trailers, the inserts shots filmed for the Asylum of the Insane version, some vintage archival sideshow/carnival footage, and an excellent 16 page illustrated booklet with rare photos and very informative liner notes written by Lisa Petrucci (current holder of the keys to the Something Weird vault). The Blu-ray also comes with a reversible sleeve, and there’s a limited (2,500) edition available direct from Vinegar Syndrome, which come housed in a nicely designed, embossed cardboard slipcase. 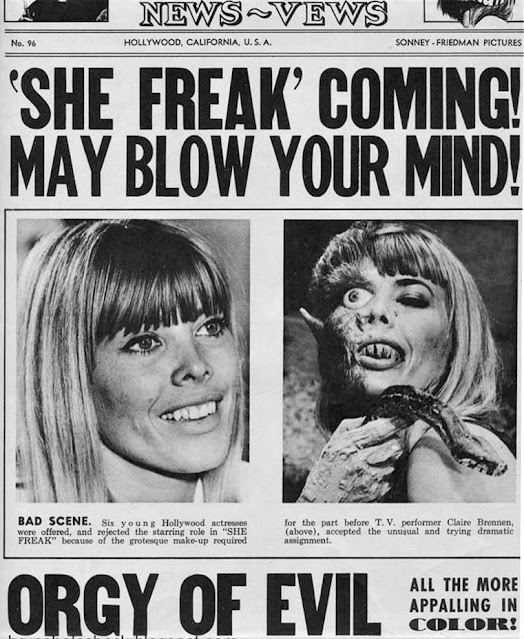 As with Something Weird and AGFA’s release of The Curious Dr. Humpp, She Freak is sure to rank high on the list for my favourite Blu-rays of 2021. It is available from several online sources, including direct from the Something Weird website, while the limited slipcover edition is still in stock at Vinegar Syndrome. Click on the relevant links below, and prepare to get your (she) freak on!

Buy SHE FREAK from Something Weird Video!

SHE FREAK with Limited Slipcover

Posted by John Harrison at 9:50 PM