DIANE FRANKLIN: THE EXCELLENT ADVENTURES OF THE LAST AMERICAN, FRENCH-EXCHANGE BABE OF THE 80s
By Diane Franklin 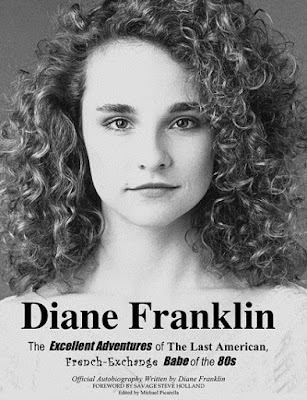 In the mid-eighties, I developed an unashamed crush on Diane Franklin. Nothing too remarkable or unique about a young film-lover harbouring a bit of a thing for an unattainable celebrity, the curious exception here being that I fell for Franklin three times in different movies before I realised I was smitten by the same actress, so effective was her ability to completely disappear, chameleon-like, into her roles (no matter how lightweight those roles may have seemed on paper). In Amityville II: The Possession (1982) she portrayed the teenaged Patricia, innocent and sweet yet aroused by dark, forbidden sexuality. In ‘Savage’ Steve Holland’s brilliant teen comedy Better off Dead (1985) she was the petite and intelligent French exchange student living next door to dumped, depressed everyman John Cusack, while in the live-action comic book horror of TerrorVision (1986) she was the exaggerated Cyndi Lauper-esque valley girl trying to deal with a dysfunctional family and a blob from outer space that was slowly devouring the whole household. While the mainstream media may have been touting Molly Ringwald as the queen of 80s teen cinema, for me that tiara always belonged to Diane Franklin. Apart from always being so much fun to watch, I think I identified with (and was attracted to) the ‘misfit’ side that inhabited most of her characters. 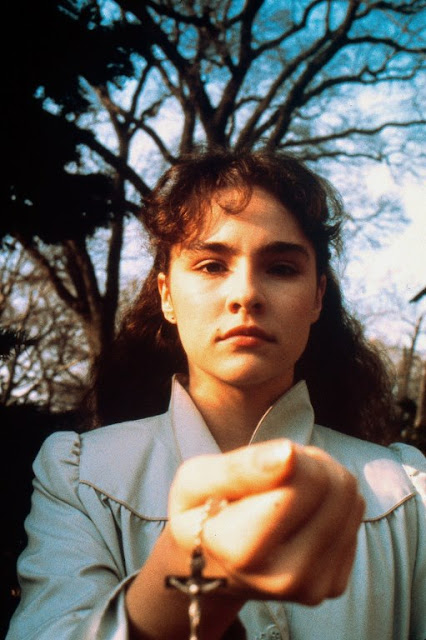 In The Excellent Adventures of the Last American, French-Exchange Babe of the 80s, Diane Franklin looks back on her childhood in Plainview, Long Island, her teen modelling career and early appearances on daytime soaps and TV movies of the week, and of course the 80s films which she is so fondly remembered for. Apart from the three films previously mentioned, Franklin also appeared in The Last American Virgin (1982), Second Time Lucky (1985) and Bill & Ted’s Excellent Adventure (1989). Each film is given a brief chapter, and in a fun little touch Diane gives each chapter a film-like ‘rating’ that warns younger readers about any upcoming racy material!


This isn’t some kind of tell-all, scandalous cash grab, nor is it an in-depth autobiography of Diane Franklin's private life, and I doubt it was ever intended to be either of these. It’s more like the ultimate souvenir scrapbook of her career, presented in a way that allows Franklin’s infectious personality to shine through. She just seems like such a genuinely nice, positive and upbeat person, happy with where she is in life and with an appreciative grasp on her contribution to 80s pop cinema culture.

Breezy but entertaining and filled with a wealth of terrific black & white photographs from all periods of Franklin’s life and career, The Excellent Adventures of the Last American, French-Exchange Babe of the 80s is – as the title suggests – a truly excellent 114 page volume that is bound to bring back nostalgic pangs and memories of all-night VHS marathons, sitting up with friends (or alone) by the light of the cathode ray, feeding tape after tape into the hungry VCR, while you sat back and snacked on chips and cola (or bongs, beer and pizza, depending on what the mood called for and the wallet allowed). 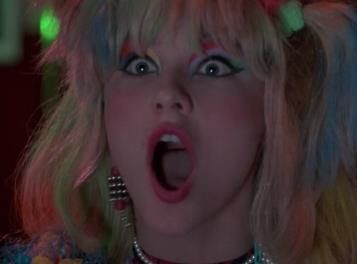 Posted by John Harrison at 4:11 AM

Caught up with the recent Hitchcock biopic last night and enjoyed it a lot more than I expected to. Directed by Sacha Gervasi (who directed the great 2008 documentary on 80s Canadian heavy metal band Anvil), Hitchcock examines the relationship between the director and his wife Alma during the making of his genre-changing 1960 classic Psycho. It doesn't paint as negative a portrait of Hitch as the other recent biopic The Girl did, but it's still not a wholly endearing portrait of the master of suspense and his curious peccadilloes.

Nice production design, and loved seeing the recreation of the filming of Psycho and it's cinematic release - the movie reiterates just what a big gamble Psycho was for Hitchcock and how ground-breaking it was at the time, and how much the studio heads hated it (until it was released and started making a fortune for them, of course). Anthony Hopkins and Helen Mirren turn in dependable performances as Alfred and Alma, Scarlett Johansson and James D'Arcy are more than serviceable as Janet Leigh and Tony Perkins, while Jessica Biel (as Vera Miles) and Toni Collette (as Hitch's assistant) are terrific and virtually unrecognizable. Also a surprise to see the original Karate Kid star, Ralph Macchio, turn up playing Joseph Stefano, the writer who penned the screenplay for Psycho. And loved the running apperance by Michael Wincott as Ed Gein, the Wisconsin psychopath, grave-robber and ghoul who inspired Robert Bloch's original novel on which the film was based. 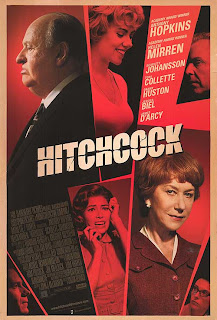 Posted by John Harrison at 3:39 AM

While most people talk about Thatcher, I will be thinking of the beautiful Annette Funicello, who has died at the age of 70 after a 25 year battle with multiple sclerosis. Farewell, sweet Pineapple Princess...she was one of my first crushes (along with Marcia Brady) and a big part of my Sunday afternoons growing up. 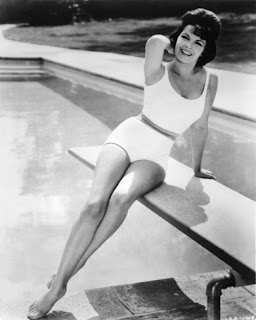 Posted by John Harrison at 1:50 AM

Written and directed by Ted Nicolaou for Charles Band’s Empire Pictures, TerrorVision has always been one of my favourite low-budget genre films from the 1980s, a garishly lurid comic book come to life which satirises virtually everything that was prominent in the disposable pop culture canvas of that decade – satellite television, the aerobics fitness craze, valley girls, MTV, swinging suburbia, new wave, heavy metal, military survivalists and ostentatious interior decorating.

The Puttermans are the ultimate caricature of grotesque eighties suburbia. Mom and dad Raquel and Stanley (Mary Woronov and Gerrit Graham) are would-be swingers wanting to spice up their love lives while trying to deal with their highly dysfunctional family. Grampa (Burt Remsen) is a survivalist with an armoury of high-tech weapons at his disposal should enemy troops suddenly appear on his doorstep. Young son Sherman (Chad Allen) plays war games with Grampa and is prone to fits (a typical 80s Prozac child), while teenage daughter Suzie (Diane Franklin) is a hyper Cyndi Lauper wannabe and probably the most (relatively) normal member of the family.

Thrown into this oddball mix is Suzie’s metal head stoner boyfriend O.D. (Jon Gries), swinging couple Spiro and Cherry (Alejandro Rey and Randi Brooks) whom Stanley and Raquel bring home for a bit of fun in the Olympic-sized Jacuzzi, and a buxom but obnoxious TV horror hostess named Medusa (played by Jennifer Richards in an obvious spin on Cassandra Peterson’s Elvira character). Oh, I should also mention the big ugly blob of an alien monster that has been banished from the planet Pluto via some strange intergalactic beam which is intercepted by Stanley’s temperamental new satellite dish, causing the monster to intermittently materialise inside the Putterman’s house, chewing on the residents and guests and leaving them a puddle of gooey gelatin.

Like many of the low-budget AIP monster movies of the 1950s, TerrorVision was initially conceived as a piece of poster art, around which Nicolaou was given free reign to write a screenplay, opting to deliver a surreal, goofy comedy satire that works so well primarily because of its larger than life characters, all of which are brought to cartoonish life by the wonderful ensemble of actors. Particularly entertaining to watch are Diane Franklin and Jon Gries, who really disappear into their roles and create a terrific onscreen chemistry, as do Mary Woronov and Gerrit Graham. Former Flying Nun star Alejandro Rey is also amusing as the sleazy but cheerful Greek swinger Spiro, whose eyes are set not on Raquel but on "manly man" Stanley (Rey would die of lung cancer not long after the film’s release, at the young age of 57).

Filmed in Italy at the old Dino De Laurentis studios, TerrorVision also boasts memorable production design by Giovanni Natalucci, a tacky mixture of Playboy mansion and art deco from Hell, which compounds the alternate reality of the film and creates the perfect playhouse for these exaggerated characters to run amok in. The ludicrous monster, built by eighties effects maestro John Carl Buechler is also an inspired creation, funny and repulsive and with its own sense of personality and character. The film additionally benefits from a cool new wave-tinged soundtrack (from Richard Band) and theme song by the Fibonaccis (in the making-of featurette, director Nicolaou talks about screening a rough cut of the film to both Frank Zappa and Lux Interior of the Cramps, in hopes of getting them to do the soundtrack. Unfortunately, they both passed the opportunity up for different reasons).

Shout! Factory’s BluRay/DVD combo pack of TerrorVision (where it is paired with Robert Scott’s 1987 low-budgeter The Video Dead) is beautifully presented, the stunning transfer really bringing the vibrant, pulsating colours to life like never before. Extras include a fun and entertaining audio commentary with director Ted Nicolaou and stars Diane Franklin and Jon Gries, and a nice 38 minute making-of featurette that contains some great behind-the-scenes photos and interviews with various members of the cast and crew. 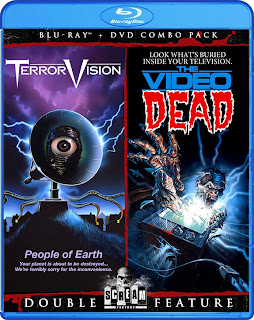 Posted by John Harrison at 1:48 AM