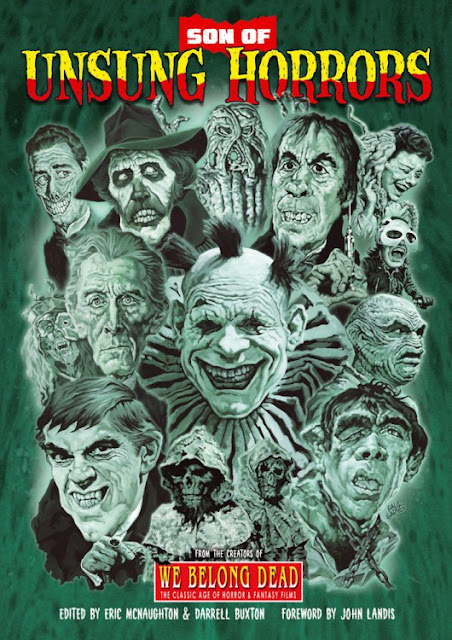 Thanks to his excellent and long-running digest magazine We Belong Dead, Eric McNaughton is one of the more prominent and respected names in the UK genre magazine scene. Recently, his imprint has expanded to include the beautiful large-sized books Unsung Horrors, A Celebration of Peter Cushing and the truly phenomenal 70s Monster Memories (which I reviewed for the pages of Weng's Chop magazine in their ninth issue from 2016). Now Eric has ushered in 2018 with another absolute treat for the classic horror fan with Son of Unsung Horrors.

Featuring an introduction from filmmaker John Landis (Joe Dante introduced the first volume), Son of Unsung Horrors follows the same format as its predecessor, with a number of genre film writers taking a look at some of their favourite overlooked or underrated horror films from the silent ear to the early-1980s, with a large majority of them coming from the 1960s and 70s (a beloved era of horror for many of the people this book is aimed at). Most films are given between two to three pages, and each essay is accompanied by a rare and often stunning selection of still, posters, lobby cards and other original promotional material, the majority of them in full colour. Some of my own favourite films covered in Son of Unsung Horrors are the atmospheric Italian film The Embalmer (1965), Paul Naschy's Night of the Werewolf (1981), Irwin Allen's outrageous killer bees disaster epic The Swarm (1978), the wonderfully strange Brit biker horror Psychomania (1973), the messy Satanic Panic pulp The Devil's Rain (1975) and The Creature Walks Among Us (1956, a film I recently discussed myself HERE as part of Diabolique's regular webite column on Universal Horrors). 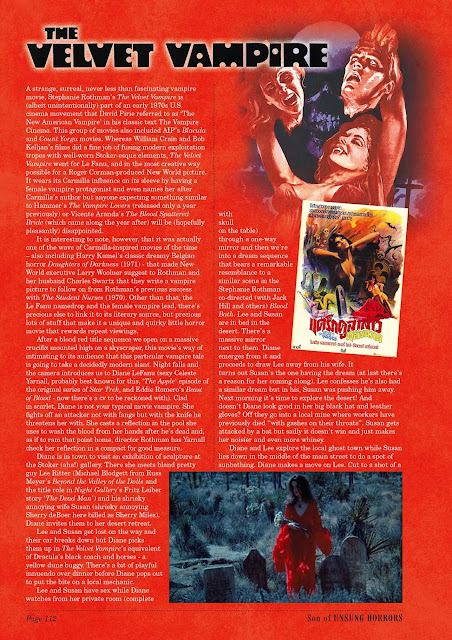 Of course, there are quite a number of films covered which, to many film buffs, are not really considered to be "unsung". Certainly, Herk Harvey's Carnival of Souls (1962) is rightly regarded as a classic and highly influential piece of surrealist genre cinema, and movies like William Castle's The Tingler (1959) and Madhouse (1972) have many admirers and have been written about extensively in the past. Likewise Peter Bogdanovich's 1968 thriller Targets with Boris Karloff, and Peter Weir's haunting Australian mystery Picnic at Hanging Rock (1975) are widely considered classics that have large followings outside the general horror audience. But on the whole Son of Unsung Horrors offers a pleasing and very interesting cross-section of titles and the writing is kept fresh by the number of contributors and their varying writing styles (some analytical, some informative, and some just plain appreciative).

The hefty cover price of Son of Unsung Horrors (UK 30 pounds plus another 20 for shipping if you are outside the UK) will restrict its appeal to mostly hardcore horror fans and collectors, but there's no doubt that if it is your cup of tea then the cost will be more than worth it to have this beautifully lush volume sitting on your shelf or coffee table for others to envy. Almost half of the limited print run for Son of Unsung Horrors has already been sold on pre-orders alone, and the rest are not likely to remain available for too long. Both 70s Monster Memories and A Celebration of Peter Cushing sold out quickly and go for mad money these days, so get in fast if you want to secure your copy of this one.

Son of Unsung Horrors is available direct from the publisher's website at www.unsunghorrors.co.uk. Click HERE for more details. 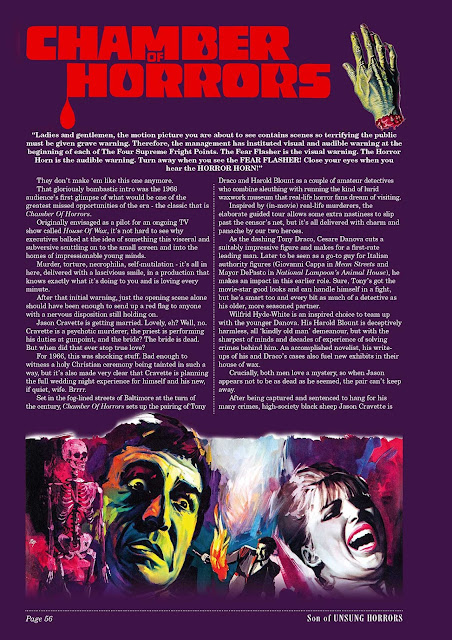 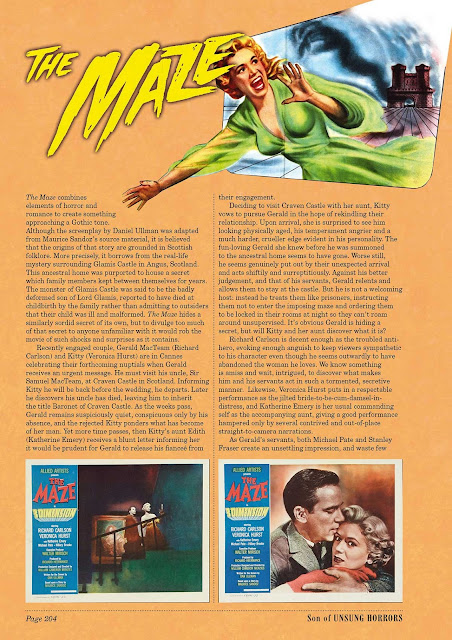 Posted by John Harrison at 1:22 AM

Received my contributor's copy of the new WENG'S CHOP Holiday Spooktacular mini-issue (#10.5) recently. 180 pages of cult and exploitation movie essays, articles, interviews and reviews that I am looking forward to digesting over the long Australia Day weekend. My contributions to this issue are an article of the 1976 drive-in classic MASSACRE AT CENTRAL HIGH (including an interview with one of the film's stars, Rex Sikes) and a piece on the stunning and provocative new film from Mark Savage, PURGATORY ROAD (including an interview with Mark and the female lead of the film, Trista Robinson). Get it from Amazon and dig it! 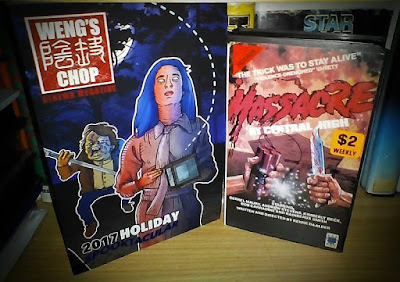 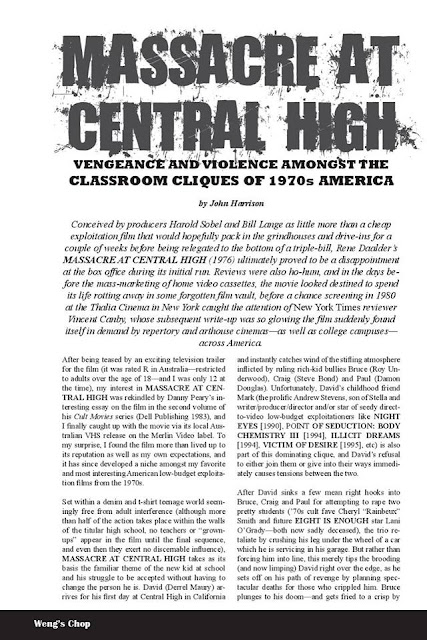 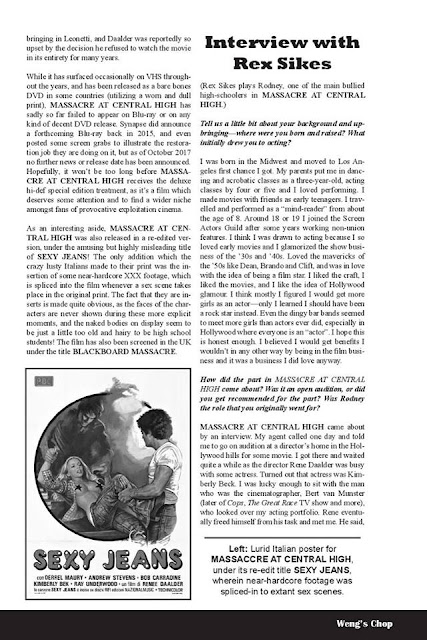 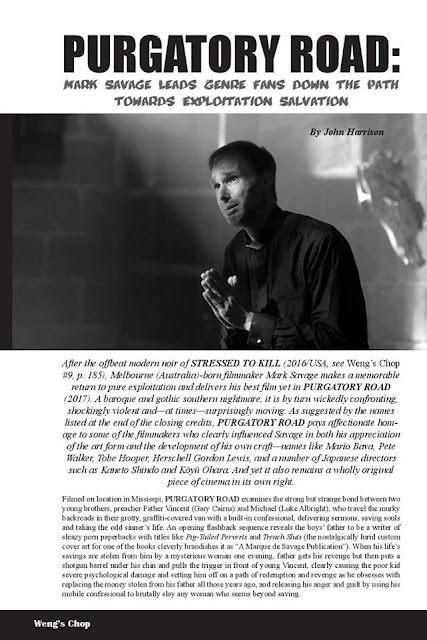 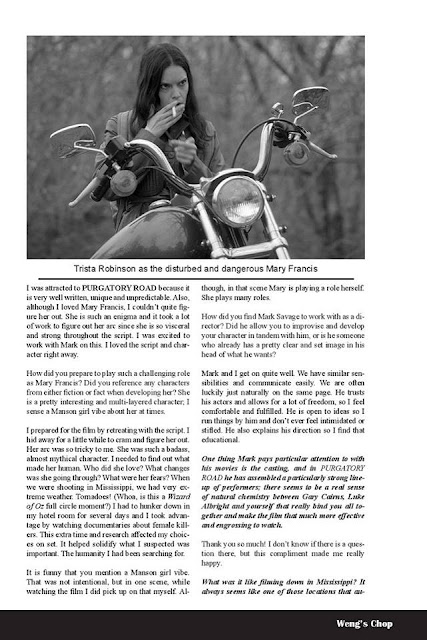 Posted by John Harrison at 7:31 PM

MONSTER! BACK FROM THE GRAVE

After a bit of a hiatus, MONSTER! should return next month with another huge issue and a great wraparound cover by Mike Hall. I believe this issue will include my article on 1970s horror movie poster magazines (including an interview with legendary UK comics and movie magazine publisher Dez Skinn). 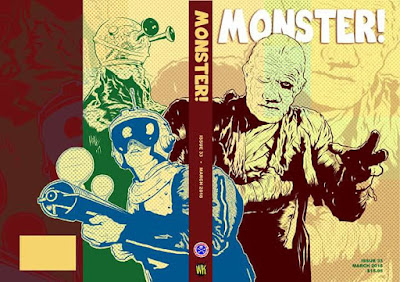 Posted by John Harrison at 7:20 PM

A thrill as usual to see my SIN STREET SLEAZE blog listed amongst the nominations for the 2018 Rondo Awards in the "Best Website or Blog" category. My fourth consecutive nomination in that category. Congrats to all the other nominees in all categories, many of whom I am friends with on FB and who do work that I greatly admire.

Aside from being nominated for a Rondo Award in the "Best Website or Blog" category this year, it's also a thrill to see a book in which I was involved in also gaining a nomination for "Book of the Year" . Edited by Amanda Reyes and published by Headpress, ARE YOU IN THE HOUSE ALONE? is a compendium of articles and reviews devoted to the classic 1964-1999 era of American telemovies, with emphasis on the more esoteric and genre-related titles. Some of the great TV movies I wrote about for this book include GARGOYLES, BORN INNOCENT, Ron Howard's COTTON CANDY, SNOWBEAST, a bunch of 1990s Stephen King adaptations and more. Was a great night launching the book at Monster Fest with Amanda and fellow contributors Lee Gambin and Kier-La Janisse, along with special guest Marneen Lynne, who talked about her own work on TV movies and played a great highlight reel that she played for the audience.

Big congrats and best luck to Amanda for the nomination, and great to see the book amongst some many other worthy nominees.

Click here for all Rondo nominations and voting instructions: 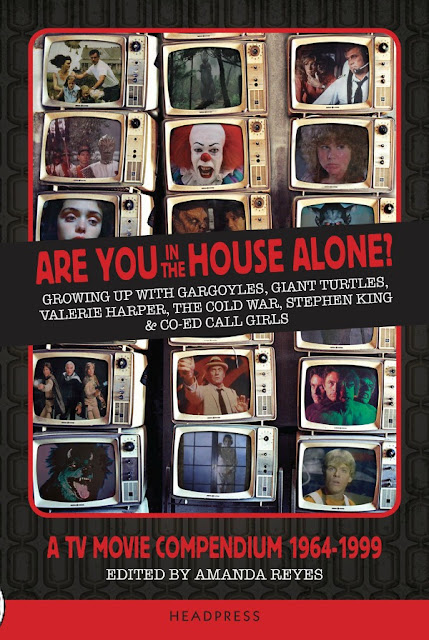 Posted by John Harrison at 7:15 PM

Ryan Coogler’s BLACK PANTHER delivers a pretty solid, involving and entertaining chapter in the all-conquering and ever-expanding Marvel Cinematic Universe (which a lot of people expected to start imploding a few years ago but only seems to have gotten stronger on the backs of some of the company’s second and third-tier and lesser-known characters). There was a lot about BLACK PANTHER that I loved – it looks beautiful and often recalls the days of the big African adventure epics, the costume design is stunning and we get a great villain (Michael B. Jordan’s Erik Killmonger) with some clear motivations that we can empathize with. Throw in a great soundtrack, some touches of humor that don’t make you groan, and some strong and nicely-realized female characters who also get to kick major butt, and you have a movie whose positives more than compensate for its odd moments of silliness and CGI-induced confusion. A blockbuster with both a heart and a brain. 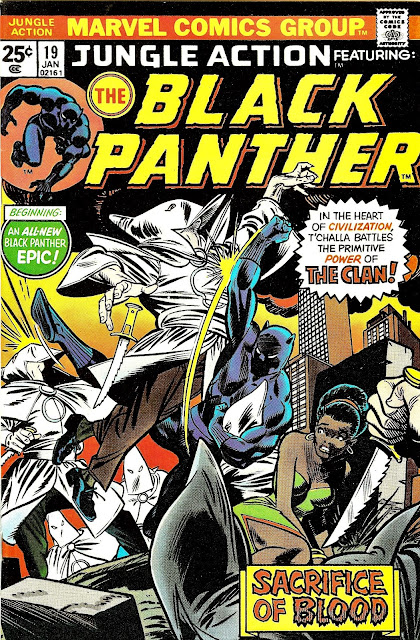 Posted by John Harrison at 7:08 PM

After missing-out on Kathryn Bigelow’s DETROIT (2017) when it made its very brief Australian cinema run, I had the chance to catch-up with it since it made its local Blu-ray release this week. How this film went completely unnoticed by the Academy voters is beyond me. DETROIT is a stark and stunning drama which unfolds during the violent civil rights riots which took place in Detroit in 1967. Focusing on a true incident which saw three teenaged blacks beaten and shot dead by Detroit PD at the Algiers Motel on the night of July 25th, DETROIT is a galvanizing and often immersive experience, as Bigelow and her photographer Barry Ackroyd use cinema verité techniques to take you into the terrifying midst of a street riot, depicting it from the varying eyes of the authorities, the rioters and the innocent people who are often caught in the middle. The use of vintage newsreel footage and crime scene photographs help the film enhance its documentary flavour. The whole cast deliver nice performances but Will Poulter takes the acting honours with his turn as a truly vile and vicious, racist young cop. DETROIT left me feeling drained, shaky, angered and saddened…just the way a movie like this should leave you. 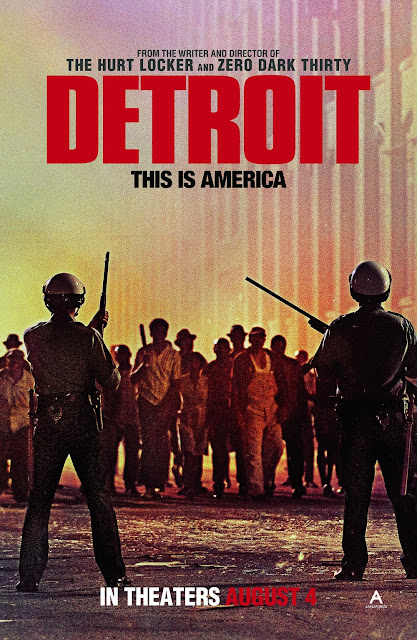 Posted by John Harrison at 7:06 PM

After the baroque brilliance of his horror western BONE TOMAHAWK (2015), S. Craig Zahler scores another home run with BRAWL IN CELL BLOCK 99, a rousing ode to the tough prison genre starring Vince Vaughn in a powerful and literally bone-crunching performance as an incarcerated drug courier who runs amok behind bars in a bid to save the life of his wife and unborn child. At over two hours long, the movie takes its time to tell its relatively simple story, but it is never less than engrossing and builds its tension beautifully, leading to a brutally violent pay-off in the last thirty minutes. It starts off gritty and real and progressively becomes more over-the-top and comic book, but it’s a natural progression and keeps you invested in the main characters and the stakes that are being played for. Great soundtrack as well, along with a nice performance by Don Johnson as a prison warden and a very creepy Udo Kier. Zahler is definitely a filmmaker to watch. 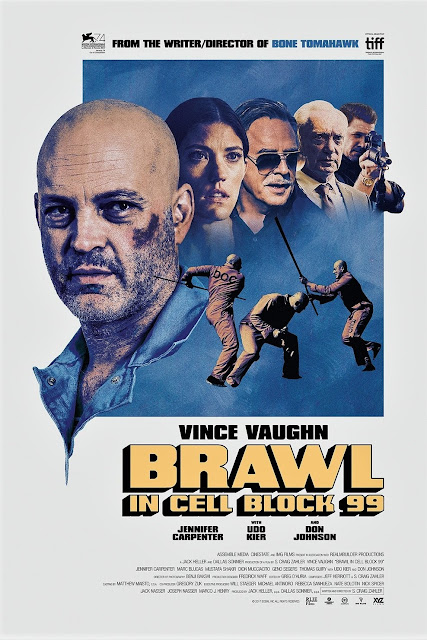 Posted by John Harrison at 7:02 PM

LEATHERFACE (2017). Now out locally on disc, this latest instalment in the line of TEXAS CHAINSAW MASSACRE sequels, prequels and reboots, has been almost universally panned, and sadly within thirty seconds of the film starting I knew we were in trouble. CHAINSAW completists and the undemanding horror fan will find it a mildly diverting watch, and there’s enough grue to make the gorehounds happy, but it is just the complete antithesis of all the elements that made Tobe Hooper’s 1974 original such an audacious and terrifying piece of work. It looks so bland and cheap and its 1950s/60s period setting has about as much authenticity as the re-enactment sequences in an average episode of FORENSIC FILES. I’m not a fan of taking horror icons and classic boogeymen and giving them an unnecessary backstory, which only serves to dilute their original aura, but if they HAD to go that route here did they have to give Leatherface such a boring and unexceptional origin? Lilli Taylor is completely wasted in this ugly-looking meld of Bonnie and Clyde and NATURAL BORN KILLERS which accomplishes nothing other than to remind us of just what a masterpiece the original is. 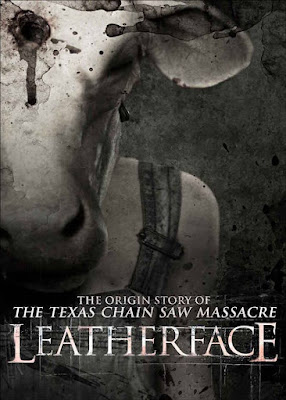 Posted by John Harrison at 6:59 PM