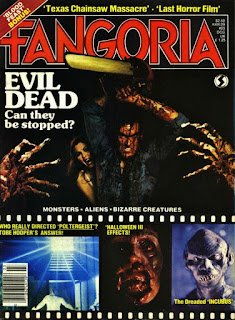 There will only ever be one true incarnation of The Evil Dead. What 21 year-old Sam Raimi and his largely inexperienced but highly eager cast and crew created in those Tennessee woods in 1980 was more than just an atmospheric little comic book horror flick with some outrageous gore effects and inventive camera work. The Evil Dead was the first horror film which became a bonafide classic thanks to the burgeoning home video market, where the movie found the bulk of its enduring audience after limited cinema and drive-in runs. In those early days of home video in Australia, we hired movies like I Spit on your Grave, Zombie Flesh Eaters and Bloodsucking Freaks to revel in their notoriety and outrageousness. But we hired The Evil Dead because we wanted to be scared shitless.

The Evil Dead gave me literal nightmares before I had even seen the film, just based on what my older brother-in-law had told me about it after he had seen it at the drive-in. And my first actual viewing of the film wasn’t in the most ideal or atmospheric of settings – a couple of friends and I, none of whom were lucky enough to have VCRs in the family as yet, had hired the movie from a video store in Bentleigh and booked one of the media rooms at Caulfield Institute of Technology, where we were studying (‘studying’ being a very loose term). There in that little room, with the glass walls around which we pulled all the curtains tight, we savoured every moment of the film, jumped when we were supposed to jump, laughed when we were supposed to laugh, and as soon as the end credits had finished, we rewound the tape and watched it again before our three-hour booking was up. Suddenly, a VCR became a necessity in my life, and this was the first of many occasions that The Evil Dead was hired from that Bentleigh store, the picture quality becoming notably fuzzier over time, as the film got played at parties, sleep overs, bong sessions and late nights spent all alone.

Up against such a strong lineage, Fede Alverez’s remake of The Evil Dead could never hope to have the same visceral, personal or pop-cultural impact, and it would probably be very unfair for anyone to expect it to. Despite this, I think it ranks as one of the more successful of the recent spate of horror reboots/remakes. It’s largely unnecessary of course, but it’s a commendable attempt at capturing the vibe of 1980s (pre-CGI/camcorder) horror and is fairly respective of Raimi’s original (no doubt the involvement of Raimi and original star Bruce Campbell as producers helps here). Having the group of characters visiting the isolated cabin in the woods in order to help their friend Mia (Jane Levy) overcome her drug addiction adds a bit more gravitas to the plot, and provides a more believable explanation for why the group didn’t just haul ass out of the woods as soon as she started behaving strangely.
It’s one of the few recent horror movies that I will probably watch again (on disc) and I would recommend it to any genre fans who are able to go into it with an open mind and no lofty expectations. 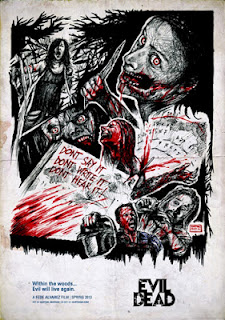 Posted by John Harrison at 2:57 AM

OFFBEAT: BRITISH CINEMA’S CURIOSITIES, OBSCURITIES AND FORGOTTEN GEMS
Edited by Julian Upton
(Headpress 2013)
Edited by Julian Upton (Fallen Stars), Headpress’ newest volume Offbeat is an entertaining and informative look at some of the lesser-known gems of British cinema – cult films in waiting, so to speak. While many tomes have been written exulting the worth of films like Get Carter, Peeping Tom, The Wicker Man and the Hammer horror classics, there have been many more British productions which have gone undervalued and, in many cases, virtually unnoticed for decades, and Offbeat aims to redress the balance, and does so most effectively.

Featuring contributions from the likes of David Kerekes, Martin Jones, Kim Newman, Jennifer Wallis, David Slater and others, Offbeat is broken up into brief chapters that look at certain themes and genres (swashbucklers, rock & roll, asylum horror, British sex flicks, the Children’s Film Foundation and the short supporting feature), interspersed with a selection of film reviews, which are presented in chronological order.

Some of the titles covered in Offbeat include Tarzan’s Greatest Adventure (1959), Jigsaw (1962), some of the lesser-known Hammers (Never Take Sweets from a Stranger,Captain Clegg, The Abominable Snowman), Twisted Nerve, Permissive,The Black Panther, Jubilee, The Squeeze and many others (along with, of course, Cliff Owen’s 1961 crime film Offbeat).

Illustrated throughout with (B&W) stills and ad-mats, Offbeat is one of those great cinema books which you read and devour with a pen and paper by your side, eagerly jotting down title after title which you will feel compelled to track down (easier said than done, considering the scarce availability of many of the films covered).

One of the cinema books of the year so far… 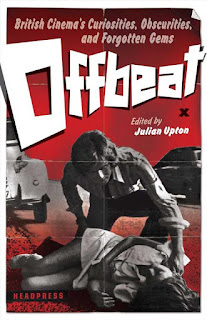 http://www.headpress.com/ShowProduct.aspx?ID=127
Posted by John Harrison at 12:22 AM

Peek at the interview with me, discussing my recent mini-book on vintage Driver's Education films (Blood on the Windscreen), that appears in the current issue of Fangoria (#323). Piece written by Kier-La Janisse.

I SPIT ON YOUR ORIGINAL

Caught up with the 2010 remake of Meir Zarchi's controversial 1978 exploitation hit I Spit on Your Grave (aka Day of the Woman). While I thought Sarah Butler did an OK job of filling the role made so iconic by Camille Keaton in the original..., I really hated the way they turned the Jennifer Hills character into an almost Jason Voorhees type, hiding in the woods for months and moving around like a ghostly apparition at times. Once the rape stopped and the revenge began, the film just ventured into generic Saw/Hostel territory.
One of the great things about the original (and Camille Keaton's performance) is the way that Jennifer Hills uses her femininty to play with the males' egos and lure them into a comfortable spot before exacting her payback. In the remake, she simply sneaks up behind her abusers and whacks them on the head with a crowbar or baseball bat, knocking them unconcious long enough for her to tie them up to some grisly but unlikely and overly-creative torture/killing device. Even the famous genital amputaion scene is played here for just a brief moment of wincing and male leg-crossing, unlike the lingering sense of suffering and uncomfortableness which Meir Zarchi achieved in his low-budget original. The introduction of the sheriff character was also an unecessary addition and seemed too closely inspired by R. Lee Ermey's faux-sheriff character in the 2003 Texas Chainsaw Massacre remake. 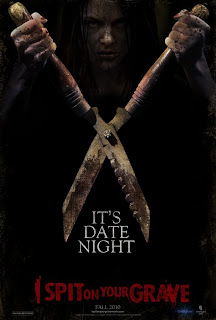 Posted by John Harrison at 1:01 AM