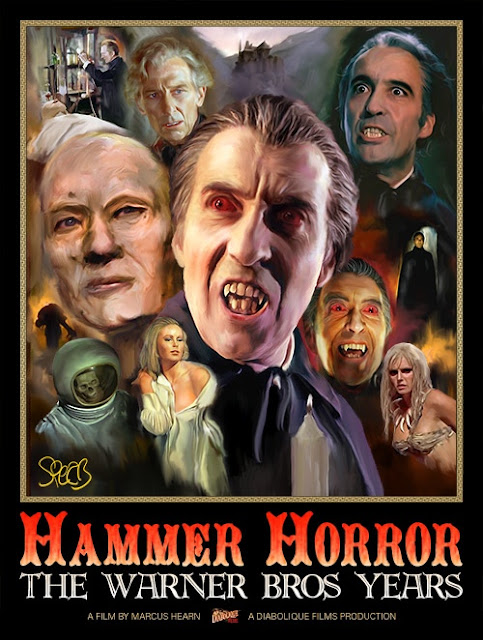 Written and directed by noted Hammer scholar and author Marcus Hearn and produced by the folks behind Diabolique magazine, HAMMER HORROR: THE WARNER BROTHERS YEARS is an entertaining and fairly deep and thorough examination of the genre films which the legendary Hammer studios produced in conjunction with Warner Brothers between 1968 and 1974, a period which saw some of the best and most daring, as well as some of the more experimental and strange, titles emerging from the studio. The infusion of money from Warners saw the films reach a new level in terms of production values, while the distribution which Hammer received from the deal also saw their films gain more visibility in terms of worldwide distribution.

By the time Warner Brothers became involved with Hammer with DRACULA HAS RISEN FROM THE GRAVE (1968), the beautifully-lurid, gothic horror productions which made the studio famous across the globe had already been around for a decade, and while they were still turning out popular films, cinema - and the world in general - had changed immesurably, and what had been horrific and shocking about films like THE CURSE OF FRANKENSTEIN (1957) now seemed rather quaint and tame compared to the new wave of cinema that was pushing boundaries and taking advantage of more tolerant censorship laws, movies such as BONNIE & CLYDE (1967), NIGHT OF THE LIVING DEAD (1968) THE WILD BUNCH (1969), MIDNIGHT COWBOY (1969) and EASY RIDER (1969), not to mention more provocative UK horror features like Michael Reeves' WITCHFINDER GENERAL (aka THE CONQUERER WORM, 1968). In an attempt to keep up with the times, Hammer began upping the ante once again, both graphically and thematically, with Terence Fisher's superb FRANKENSTEIN MUST BE DESTROYED (1969) and Peter Sasdy's TASTE THE BLOOD OF DRACULA (1970), as well as the strange and rather obscure CRESCENDO (1970). Other Hammer movies produced with the help of Warner's during this period included the rather oddball science-fiction film MOON ZERO TWO (1969) and the prehistoric adventure WHEN DINOSAURS RULED THE EARTH (1970) with Victoria Vetri.

When Warner Brothers was sold and changed hands in June of 1969, the new owners sadly decided to cut right back on their dealings with Hammer, effectively limiting their involvement with the studio to just one film per year, a period which saw the release of DRACULA A.D. 1972 (1972), THE SATANIC RIGHTS OF DRACULA (1973) and the much-maligned kung-fu/horror hybrid THE LEGEND OF THE 7 GOLDEN VAMPIRES (1974). Sadly, by this point Hammer were once again being made to look somewhat antiquated in the wake of THE EXORCIST (1973) and the more provocative, grimy and transgressive British horror films directed by the likes of Pete Walker, such as HOUSE OF WHIPCORD (1974) and FRIGHTMARE (1974). Indeed, Warner did not even bother with a US release for the the last two films they produced under their deal with Hammer, with both THE SATANIC RIGHTS OF DRACULA and THE LEGEND OF THE 7 GOLDEN VAMPIRES sitting on the shelves for several years before getting a belated stateside release (under various titles) by small independent distributors.

Along with a number of rare production photos and archival behind-the-scenes footage, HAMMER HORROR: THE WARNER BROTHERS YEARS features new on-camera interviews with stars like Veronica Carlson, Madeline Smith, Caroline Munro and John Carson, as well as director Peter Sasdy along with noted Hammer fans and historians Joe Dante, Jonathan Rigby, Denis Meikle and others. My own personal highlights from the documentary are those which cover CRESCENDO (a film rarely discussed in other Hammer books or documentaries) and the scenes that were cut from various films for their US release (such as the controversial rape scene in FRANKENSTEIN MUST BE DESTROYED and Victoria Vetri's nude shots in the otherwise kid-friendly WHEN DINOSAURS RULED THE EARTH).

In many respects, HAMMER HORROR: THE WARNER BROTHERS YEARS is like a feature-length (101 minutes) version of the excellent featurettes which Hearn has put together for many of the non-Warner Hammer Blu-rays that have appeared over recent years.With most of the Warner Hammer Blu-ray and DVD releases being sadly bare bones affairs, this documentary provides the perfect accompaniment for these films, and should appeal to both die-hard Hammer fans and general cinema buffs and historians alike.

More information on the documentary can be found at the Diabolique website at the following link: 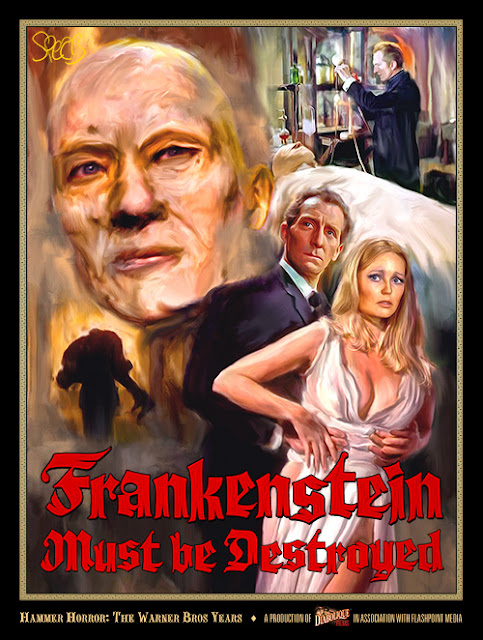 Posted by John Harrison at 8:51 PM

My piece on the classic 1963 Roger Corman mind-bender  X: THE MAN WITH THE X-RAY EYES is now up on the Diabolique website. Click on the link below to read.

X: THE MAN WITH THE X-RAY EYES Diabolique Article 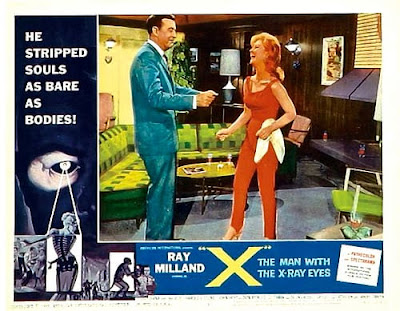 Posted by John Harrison at 8:30 PM

My current TV binge watch is the first (1974) season of POLICEWOMAN, a show I enjoyed watching growing-up but only ever saw sporadically so it's great to see how it unfolded and developed from the start.
My impetus for revisiting this series came about from recently watching the first fantastic season of POLICE STORY, where the final episode ("The Gamble") was the clear inspiration for POLICEWOMAN, since it starred Angie Dickinson as an undercover cop (with a different name to her "Pepper" Anderson character) alongside Ed Bernard and Charles Dierkop, both playing the same cops (Styles and Royster) that they would portray in POLICEWOMAN. With Bert Convy playing the character which Earl Holliman would portray in POLICEWOMAN, "The Gamble" is another great episode of POLICE STORY and provides a further example of just how honest and uncompromising the series was (at one point in "The Gamble", when the Angie Dickinson character goes undercover as a hooker, Royster asks her "Do you know what a string of pearls is?").
POLICEWOMAN is not quite as tough or gritty as POLICE STORY but it is still a highly-enjoyable watch anchored by a great cast with terrific chemistry, and of course Dickinson is so strong as the lead. Some great guest stars so far in the first season as well - my favourites being William Shatner as a high-school science teacher mixed-up in the on campus drug trade, and Bob Crane as a radio DJ who uses his wife's extra-marital affair as an excuse to bump her off. Considering Crane's own bloody demise in a Scottsdale motel room just a few years later, it's a rather unsettling appearance. I had to wonder if he flashed his famous collection of X-rated Polaroids to Angie while on set (he was supposedly quite proud of his photography work and not shy about showing it)?
Now I need to find the POLICEWOMAN action figure and costume accessory sets, would make great playtime fun with the KOJACK and STARSKY & HUTCH dolls from the same era. 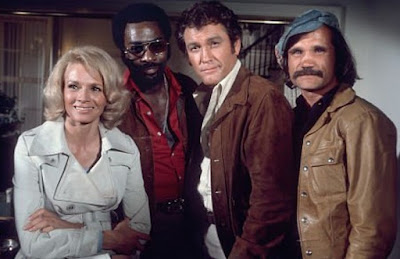 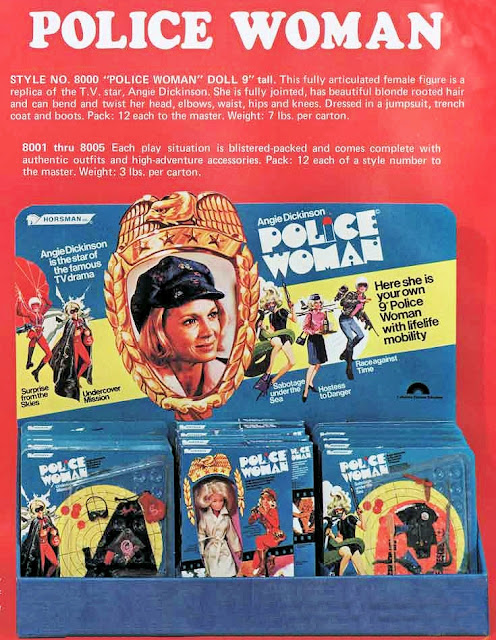 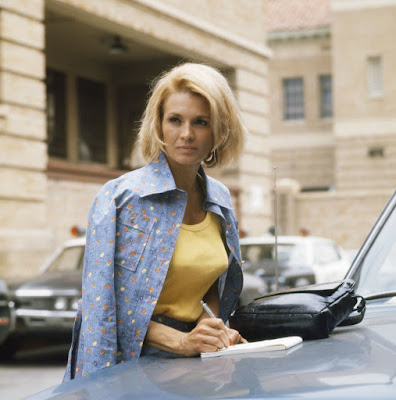 Posted by John Harrison at 8:25 PM