Hailing from the small town of Minot, North Dakota, Marneen Lynne Fields - often credited just as Marneen Fields - is today forging a career as a singer-songwriter and CEO of her own song publishing company, Heavenly Waterfall (her composition ‘Shadows’ is a great piece of smoky, blues-tinged nightclub pomp and pop that conjurs up images as diverse as vintage James Bond cool and dark David Lynch perversity). While music is her clear and driving passion, Fields also has to her name an impressive list of credits in front of the movie and television cameras dating back to the mid-1970's, both as an actress and, until the early-1990's, as a trail-blazing stunt woman working in a very tough and physically demanding field.

Aside from working on films such as The Gauntlet (1977) with Clint Eastwood and Joe Dante’s lycanthropy classic The Howling (1981), Marneen Fields performed stunts on a string of classic and fondly-remembered television shows like Wonder Woman, Fantasy Island, Battlestar Galactica and The Fall Guy. She also worked on a number of big screen disaster movies during the last few years of the genre’s great 1970's era. Exploitation fans might recognize her from the enjoyably seedy grindhouse flick Hellhole (1985), where she worked alongside an amazing list of cult and fringe favourites, including Marjoe Gortner, Ray Sharkey, Edy Williams, Mary Woronov, Robert Z’Dar and more!

While working on an upcoming article on 1970's disaster movies (which is due to appear in a futire issue of Weng's Chop), I recently had the chance to ask Marneen a few questions about her career as a stunt woman, actress and working on The Swarm, Airport '79: The Concorde, Beyond the Poseidon Adventure and more. The interview will run alongside the article, but as a little sneak peek, here is Marneen's recollections of working on one of the most-loved television shows of the 1970's, Wonder Woman (I imagine a turkey baked by Lynda Carter would be pretty tasty, as well):

"In Wonder Woman, during the 'Mind Stealer’s from Outer Space' episode I got beat up by Wonder Woman herself, Linda Carter. Linda threw me straight onto my back onto the hard wood floor as I performed front flips and falls all over her apartment in that scene. As a gymnast you always perform on mats and pads, and they’re there to cushion your landing if you fall off the balance beam. Being one of the first pioneer women of stunts, I did a hundred falls straight onto my back and stomach. I hit and roll across hard wood floors, cement sidewalks, and hard dirt fields in the name of film making wearing only a small child’s football girdle and some knees pads and elbow pads. The impact hurt like hell, and there were always bruises or some kind of minor injury! I worked on the Wonder Woman series close to Thanksgiving, and I remember Linda Carter carrying in a turkey she had baked for the entire cast and crew. That was the best turkey I’d ever tasted." 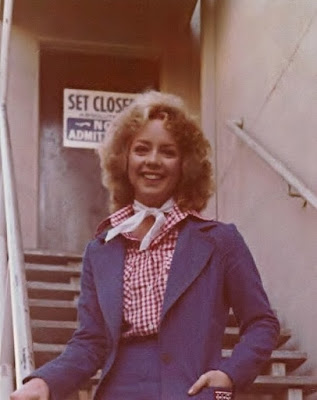 (Above: Marneen Fields in character on the Universal lot during filming of Airport '79: The Concorde. One of several great candid photos that will be featured in the article).

(Above: Marneen in a scene alongside Marjoe Gortner and Mary Woronov from 1985's Hellhole, an exploitation gem that sadly is not widely available. It was released on VHS but only seems to have made it to DVD on public domain labels in analog quality).

Posted by John Harrison at 4:38 PM

Shout at the Devil.
Looking forward to diving into Kier-La Janisse's latest work, Satanic Panic, which she co-edits and contributes to along with a number of other writers, including David Flint and Melbourne's own Alexandra Heller-Nicholas.
Attended the local book launch for Satanic Panic last night at The Backlot Studios. Kier-La gave a great little talk around the book's subject, accompanied by some slides and interesting clips (a few scary, a few hilariously entertaining - some of the them both at once). Satanic Panic looks at the presence and influence of Satan in 1980's pop-culture, everything from Dungeons & Dragons and horror movies to pulp paperback novels and The Smurfs. Not to mention The Parents' Music Resource Center (PMRC) and their campaign against the satanic presence in music, particularly heavy metal. There's also the much more real and darker side, with several gruesome and tragic murder and suicide cases, which at the time were played up as being highly satanic in motivation, rather than looking for any true underliying cause that lay much closer to home.
Following the talk, the audience was treated to a screening of Charles Martin Smith's Trick Or Treat (1986), a horror movie/heavy metal hybrid that was clearly inspired by the backwards masking and hidden messages in music controversy which was then very much in the public eye.
Another cool event by Lee Gambin and the Cinemaniacs gang, and a fitting way to kick-off Halloween weekend. 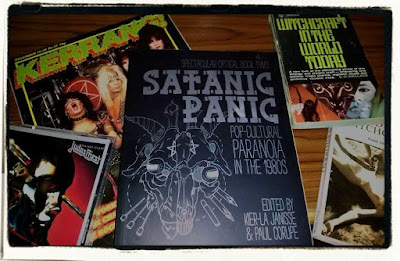