Out now on blu-ray through Kino Lorber, The Erotic Rites of Frankenstein (1972) is a real hoot, one of the wildest riffs on the Frankenstein legend and the best pairing of Frankenstein’s Monster and naked women since Kiss Me Quick!(1964). Filmed in Portugal, the movie is wonderfully evocative of those delirious European horror pulps of the 1960's and early-70's, whose cover art promised lurid adventures of monsters and sex. Jess Franco captures some stunning individual shots in The Erotic Rites of Frankenstein, often using his favoured wide angle lens to create an even more disorienting and dream-like ambience. The movie is also an aural trip, the soundtrack full of jazzy drumrolls and complemented by the strange squawks with which blind bird woman Melissa (Anne Libert) communicates. Cast members include such Franco regulars as Howard Vernon and Denis Price (whom I always loved as the graverobber in Hammer’s Horror of Frankenstein), and of course the director himself shows up, playing Morpho the lab assistant.
The muscle-bound, silver/metallic blue-coloured Frankenstein Monster in the movie is an inspired creation...I’m tempted to customize one of my existing Frankenstein figures or kits to pay tribute to it.
At only 72 minutes, I was easily able to sit through the movie twice in a row, the second time listening to the audio commentary (from Video Watchdog editor Tim Lucas), which expounds a bit on the film’s roots in European pulp, and the controversy around Frankenstein’s Monster seeming to be partly mechanical (and tracing the roots of this idea back to the original Universal series of the 1930's). 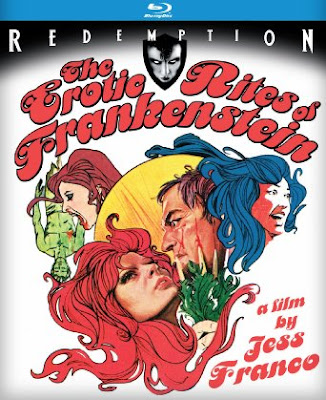 Published in hardcover by Two-Morrows, Monster Mash by Mark Voger does not contain a lot that is new in regards to the monster movie craze that swept across America between 1957 - 1972. It’s an area that has been covered in many books, magazine articles and documentaries over recent years, that there is not a whole lot more to tell, at least seemingly on a surface level (though some fascinating individual tales may still be there to be discovered and told). Fortunately, author Voger realises this and concentrates on making Monster Mash as much of a visual feast as possible, and on this level the book succeeds wonderfully, with many large colour and B&W photos that should bring the era back to life for any nostalgic Monster Kid, and will help show the younger generations of horror movie fans some of the fun they missed out on.
It’s all here - the monster magazines, the fantastic television of the day, 8mm home movie reels, Aurora kits, bubble gum cards, Don Post masks, horror TV hosts, Boris Karloff, Ed ‘Big Daddy’ Roth, horror comic books and more. If it was monster related and kids spent their pocket money on it in the sixties, it’s bound to be in here somewhere, along with a few new interviews with people like horror host Zacherly, Famous Monsters publisher James Warren, Aurora monster kit box artist James Bama, and several cast members from The Munsters and The Addams Family.
Monster Mash takes you on a rather brief but enjoyable journey down a dark and stormy old memory lane. 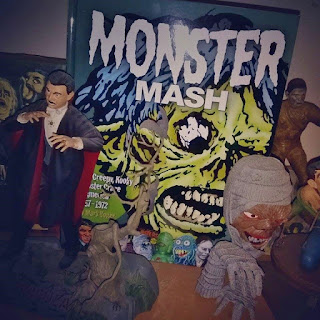 Planning to see Mission: Impossible - Rogue Nation later this week, so decided to binge-watch my way through the first four films in the series so far. That’s a lot of Tom Cruise, but fortunately Ethan Hunt remains one of his better and more bearable roles, and you can’t argue that he consistently manages to bring it when it comes to delivering a big action set-piece in these movies (usually doing a vast majority of the stunt work himself).
The really cool thing about Brian De Palma’s Mission: Impossible (1996) is that it is as much a De Palma film as it is an effective updating of a 1960's television favourite. De Palma’s infamous Hitchcock homages and camera tricks actually serve the film really well here, and the screenplay by Robert (Chinatown) Towne delivers a few genuine twists along the way. John Woo’s follow-up, Mission: Impossible 2 (2000) has lots of visual flash but very little substance. It was probably one of the last of the big action movies done in the style that had been so popular during the nineties, before everything started becoming more gritty and grounded post-9/11. M: I 2 does have a pretty jaw-dropping opening sequence of Cruise climbing the treacherous Dead Horse Point in Utah.
J.J. Abrams, who rebooted the Star Trek franchise recently and hopes to successfully do the same with Star Wars later this year, made his feature directorial debut with Mission: Impossible 3 (2006), which tried to focus as much on Ethan Hunt’s life away from the job as when he was on it. From the rapid editing to the more washed-out colour palette, you can tell this film was made in the immediate post-Bourne Identity years, and it’s my least favourite of the M:I films, though Philip Seymour Hoffman makes an interesting villain. I saw Brad Bird’s Mission: Impossible - Ghost Protocol (2011) on the Melbourne IMAX screen and those shots of Cruise mountaineering about on Burj Khalifa tower in Mumbai, the world’s tallest building, were dizzying indeed, and the sequence still manages to produce white knuckles in the living room. A few other great action sequences and a couple of tense situations make Ghost Protocol my favourite of the sequels so far.
Unfortunately, none of the Mission: Impossible films play the classic Lalo Schifrin theme as well as the man himself did in the original 1966 - 1973 television series. 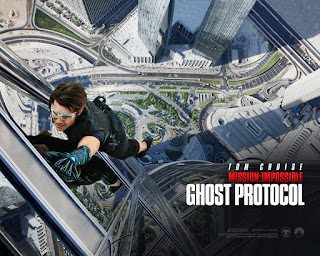 Caught up with Paul Thomas Anderson's 2014 film Inherent Vice last evening, and was seduced by it's strangeness and terrific ensemble cast (including Joaquin Phoenix, Josh Brolin, Reese Witherspoon, Katherine Waterston and Benicio del Toro). Based on the 2009 novel by Thomas Pynchon, the movie is certainly in a genre of its own - a free-form stoner comedy noir set within the immediate paranoia of post-Manson LA in 1970 (where police were treating the gathering of more than three youths in one spot as a potential cult). It's one of those movies that will frustrate viewers looking for a easy narrative plot, but if you let yourself just get drawn into it, and lost within its familiar but off-kilt world, you can come out the end feeling rewarded for having stayed the two-and-a-half hour distance.
For me, Anderson has never come close to matching the brilliance of this sophomore film, Boogie Nights (1997), but Inherent Vice is certainly another worthy addition to the director's solid filmography. 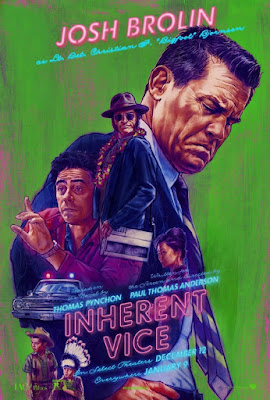 UNQUIET DREAMS
THE BEASTIARY OF WALERIAN BOROWCZYK
By Simon Strong

Written by Melbourne-based, North England-born Simon Strong, Unquiet Dreams isn’t the definitive biography of Borowczyk, or the most in-depth study of his work, which the author freely admits to in his introduction. Rather, it comes across as a greatly-expanded idea similar to those souvenir program booklets which I used to religiously buy whenever I went to the movies when I was a kid, where each booklet was devoted to the one particular film, and featured photos, synopsis and production photos. The classy and classical front cover (featuring Polish artist Wladyslaw Podkowinski’s Frenzy of Exultations) hides an interior that is influenced in design by the arty smut film magazines of the period, such as Continental Film Review and Adam Film World. Within the contents of the book, Strong offers up the expected filmograpy of Borowczyk’s work (including his early shorts), as well as profiling several of the filmmaker’s leading ladies (such as Marina Pierro and La Bête’s Sirpa Lane), and takes a look at Argus Films, the company which distributed a lot of Borowczyk’s films.

One of my favourite aspects of Unquiet Dreams, and one which will no doubt help broaden the book’s appeal beyond those interested specifically in Borowczyk, is the way Strong includes little follow-up chapters that expand to investigate a particular topic’s depiction in the wider exploitation film market. For example, the book contains a ‘Zoophilmography’, in which films that broach the subject of bestiality are looked at (including titles like Tarzan and the Ape Man [1932], Tanya’s Island [1980] and Rinse Dream’s cult XXX film Café Flesh [1983]). Another chapter of the book, after examining  Dr. Jekyll and the Women, then goes on to cover other ‘Jeksploitation’ films, such as Hammer’s gender-bending Dr. Jekyll and Sister Hyde (1971) and the David F. Friedman produced sexploitation quickie The Adult Verison of Jekyll and Hyde (1972), starring Rene Bond.

Published by the LedaTape Organisation, Unquiet Dreams features an abundance of colour and black & white photos and poster art within its 136 pages. A worthy and recommended addition to your euro-trash cinema bookshelf. 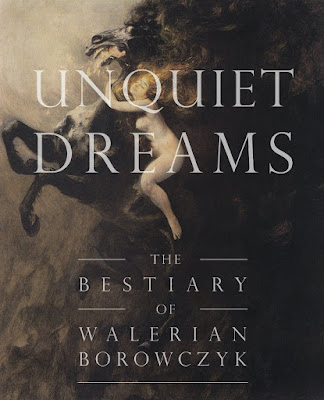 Posted by John Harrison at 9:17 PM

Spent the pre-dawn hours this morning watching the great Andrew Prine going psycho in John Peyser's The Centerfold Girls (1974), which came out locally on blu-ray last week. Part sexploitation, part American giallo, part psycho slasher, it's the kind of scuzzy, seedy grindhouse fodder that early Australian video labels like Star Base, K&C and Media thrived on in the early-eighties. It lays on the three big Bs of exploitation (Babes, Boobs and Blood) in ample doses, has a groovy soundtrack that's both cheesey and sleazy, and a pretty effective and shocking climax, filmed in a section of Canoga Park that had recently been levelled by a fire, leaving a very stark and surreal landscape in its wake.
Interestingly, the movie is almost like an anthology film, with each of the titular centerfolds that Prine's character tracks down and terrorizes having their own insular story (the end credits emphasize the anthology feel, with the cast listed by story). One of the stories has a somewhat Manson-esque/Last House on the Left vibe to it, and the film as a whole wallows in that peculiar and distinct seediness that many of the rougher American exploitation flicks from this period possessed.
The transfer on Glass Doll Films' blu-ray release of The Centerfold Girls isn't as sharp or vibrant as their other great new release, 1973's Bonnie's Kids, but it still the best the film has ever looked and Glass Doll have done a fine job with the packaging and extras. 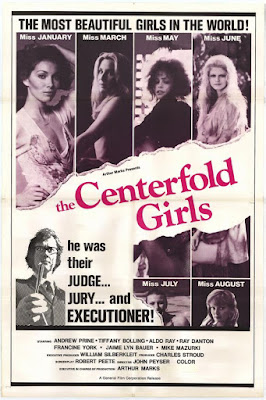 Posted by John Harrison at 2:16 AM 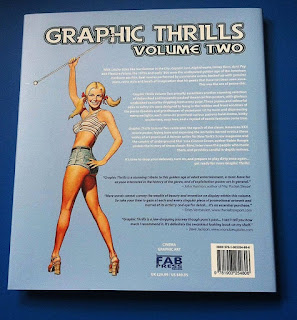 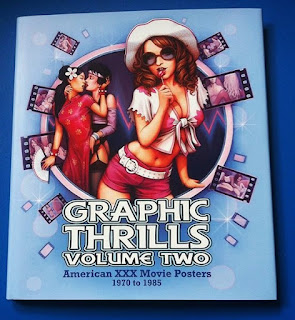 Posted by John Harrison at 2:11 AM

Satdee night spook show. Watching William Grefe's low-budget Everglades horror Sting of Death (1965), featuring the half-man/half-jellyfish monster, one of the cheapest and most ludicrous celluloid creatures ever created, consisting of nothing more than a guy in a wet suit with an inflated plastic gargabe bag tied over his head, and a few bedraggled loose strands of a beaded door curtain drapped over his shoulders and arms. Great outragoeus stuff!
Have to say the colour palette in Sting of Death is often nice and garish, and I love the inclusion of the big dance number, when a wild pool party whips up a storm to the accompaniment of Neil Sedaka's 'Do the Jellyfish'. I also love how all these partygoers can be dancing around a backyward swimming pool in broad daylight, and not one of them notices the human-sized jellyfish monster swimming around in it.
I think my favourite character in the movie is the young lady who one moment is so traumatised by seeing a boatload of her friends being capsized and stung to death by a school of jellyfish, yet less than five minutes later she "can't wait" to don her scuba gear and start exploring the reefs in the same area! 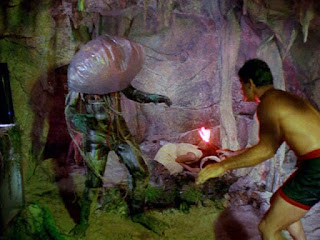 Posted by John Harrison at 2:07 AM