Finally caught up with the recent Texas Chainsaw (aka Texas Chainsaw 3D  in the US), which has just received a belated release in Australia. Having watched it, I can see why it went straight to disc over here. Another in a growing list of un...inspired modern horror sequels/remakes, filled with the usual unsympathetic young adults who do incredibly dumb things. The female lead (Alexandra Daddario) looks really cute in a 'Joan Jett meets a 70s giallo femme' kinda way, but geez is her character short on common sense. She choses the most ludicrous places to hide from Leatherface, and her eventual 'metamorphosis' makes Linda Blair's transformation into a crossbow-toting, skin-tight leather wearin' avenging angel in Savage Streets seem emotionally resonant and grittily realistic in comparison.

There are a few frights scattered throughout, but most of them are predictable and mostly just rehash similar set-ups from Tobe Hooper's classic 1974 original (which will never be touched). Blatant gore replaces the clever perceived graphicness of the original (which brilliantly conned many viewers into thinking they had seen a lot more blood and entrails than they really did). I liked the ideas of warring southern clans and vigilante justice, but they are given no weight or excitement here, just cliché upon cliché. I couldn't imagine 3D adding anything of value to the film. It also throws Hooper's own 1986 sequel on the trash heap in terms of series continuity.

The film's one genuinely unnerving and original moment is a brief scene where we see exactly what Leatherface puts himself through in order to attached that human skin mask to his face.

"Incredible! A perfectly terrifying follow-up to the original" - this quote from Tobe Hooper on the back cover of the DVD initially mystified me, until I realized Hooper's name was also in the film's credits as an executive producer. 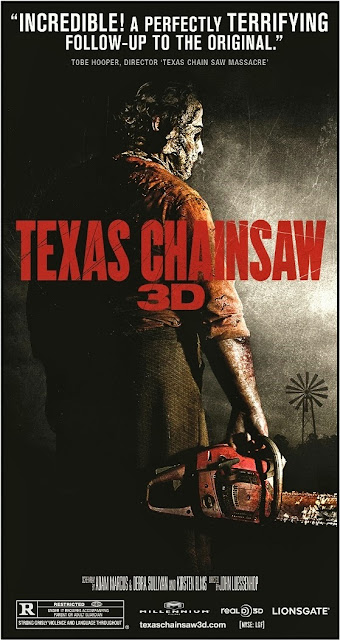 Posted by John Harrison at 6:27 PM

(NOT SO) SAVAGE STONE

Caught up with the recent Oliver Stone film Savages on Blu-ray yesterday. Based on the novel by Don Winslow, it is a kind of new age romance/thriller/crime drama about a violent Mexican drug cartel trying to muscle in on the turf carved-out... by a couple of hip young Californian pot growers. There's some moments that recall the Oliver Stone that penned the screenplay for Scarface (1983), but overall I found it a rather cold and ultimately uninvolved experience. The 'we three are one whole' polyamorous relationship of the trio of leads (Taylor Kitsch, Blake Lively and Aaron Taylor-Johnson) seemed very forced and the bland performances of the three didn't help. As usual, Salma Hayek (playing a drug cartel boss clearly modelled on Griselda Blanco) is stunning to look at, but she doesn't really convey any real depth or sense of ruthlessness. John Travolta does little in his small role as a corrupt DEA agent. Only Benicio del Toro creates any kind of genuine impact, not because his role as a cartel enforcer is anything original or especially well-written, but he at least creates an impression of genuine sleaze, repulsion and tightly-strung violence just waiting to explode. The ending of the movie was very manipulative and pissed me off. Received my very cool Return of the Living Dead Tarman mask and shirt from Fright Rags last week - limited to 500 sets, they contain a two-sided shirt featuring a new design by William Stout (who worked on the original 1984 film), and a plastic mask designed by sculptor Monte Ward, all packaged like one of those classic old Ben Cooper dime-store costumes from the 1960s/70s. 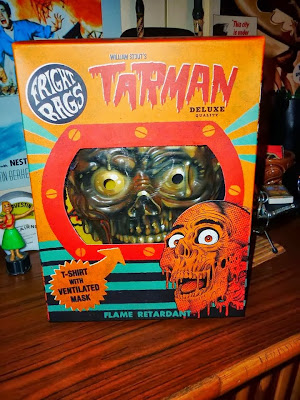 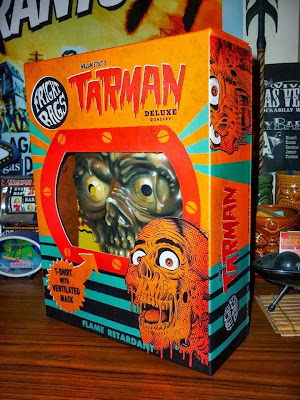 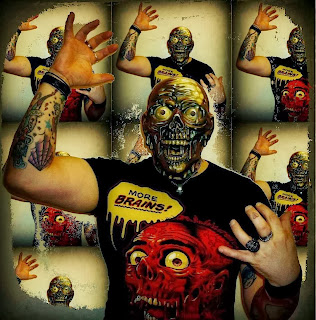 MANSON ON THE RACK

New issue of the great Crime Factory magazine (#14) is now out, featuring my article on vintage Charles Manson related pulp magazines. Ordering details on the magazine's website (you can also download a free PDF of the issue as well):
http://www.thecrimefactory.com/2013/09/crime-factory-issue-14-is-out/ 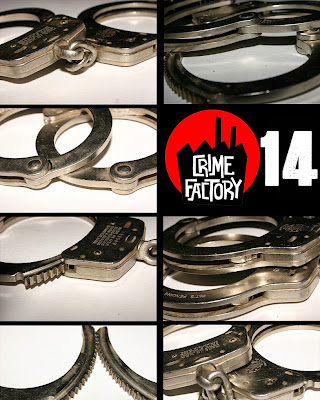 Having recently sat down and re-watched all four movies in the Psycho series, and before I plough into Stephen Rebello’s book on the making of the original, I decided to re-read Robert Bloch’s 1959 source novel for the first time since I was about 15. It still holds up as a great little pacey read, chilling in parts even though the story and twists are all so familiar by now. What impresses me the most is the way Bloch brings the character of Mother to life, making her an integral and seemingly legitimate part of the story without ever actually asserting that she is a real physical presence. It’s classic horror pulp and one can easily see how many thought Hitchcock was committing career suicide, just as easily as one can see what Hitch found so compelling and potentially cinematic about it. The shower sequence is just as much a story-twist shock on paper as on celluloid (though in different ways – sustained on film but incredibly blunt and abrupt on paper). I kinda wish Gus Van Sant had attempted a more faithful interpretation of the novel when he directed his 1998 remake, rather than the shot-for-shot ‘homage’ he inflicted upon us. Re-reading the novel has also made me long for a good bio/biopic of Calvin T. Beck, the editor of Castle of Frankenstein magazine on whom Bloch supposedly based much of the Norman Bates character (along with infamous Wisconsin ghoul Ed Gein).

For more on the Calvin T. Beck/Norman Bates connection, read Tom Weaver’s terrific article on the subject at the following link:
http://www.bmonster.com/horror29.html 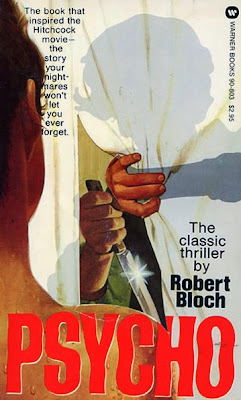 BELIEVE IT OR NOT

Halfway through A Curious Man, Neal Thompson's bio of Robert Ripley (of Ripley's 'Believe It or Not' fame). It's an entertaining and intriguing read so far. I've always strongly felt the allure of Ripley's exotic world - his odditoriums whi...ch I visited on vacations to America as a teen, some vintage paperback collections of his illustrations I found in a second hand bookstore, and the 1980s Believe It or Not television series hosted by Jack Palance. But all I really knew about the man himself was what I read in the slim souvenir booklet which I bought at the San Francisco odditorium. In A Curious Man, Ripley comes across, at least in his early days, as a somewhat eccentric but likeable misfit, displaying (like many men of the period) some rather primitive attitudes towards women and a lack of any political correctness. The revelation that a lot of Ripley's famous oddball facts were actually dug-up by a hardworking research assistant who received not a single credit or mention, is a little disillusioning but hardly surprising. Some of Ripley's early observations on subjects like Japan's naval build-up and the potential consequences of religious fanaticism, proved eerily astute in hindsight. Where the bio really comes to life for me is in the descriptions of Ripley's early treks to locales like the Orient, India and New Guinea, places that were still considered very strange and unknown to most westerners - beautiful but forboding. Reading of Ripley's travels to these places, collecting all manner of cultural curios along the way, made me appreciate just how much more thrilling and dangerous it would have been to disappear into these countries back in the 1920s, when much of them were still unexplored by foreigners, and home and family weren't just a mobile phone or internet café away. 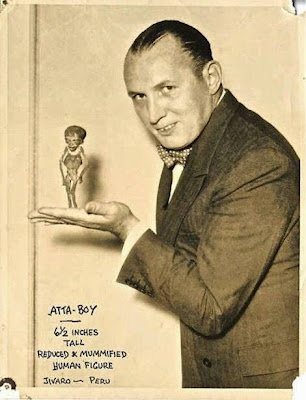 Posted by John Harrison at 5:57 PM