STANDING OVATION! YOU'RE THE STAR!

My lovely and very talented and creative wife Marneen has just made her fantastic new song "Standing Ovation! You're the Star!" available to listen to on You Tube, and I couldn't be prouder of her work here. A catchy tune with a cool and crisp 1980s Euro new wave techno-pop feel, it should have no trouble getting people in the clubs up and movin' it on the dance floor. Sounds especially awesome played loud through a pair of good headphones...the perfect way to shake out some cobwebs.

This new Netflix drama produced by David Fincher (who also directed four of the first ten episodes) is just superb and compelling filmmaking all-round. Based on the life and career of legendary FBI agent John Douglas - who in the 1970s was the first person to believe that interviewing incarcerated serial killers could help predict behavior patterns, break unsolved murder cases and identify potential offenders before they have the chance to act - everything from the performances to the writing, music and unobtrusive 70s detail is so succinctly constructed here. It's a slow-burn for sure, more ZODIAC than SE7EN, but I am perfectly fine with that, especially since ZODIAC is my favourite Fincher film. The scenes where the two lead FBI agents interview Ed Kemper and Richard Speck in their prisons have moments of nuance to them that are absolutely chilling.

Already eager for the second season. 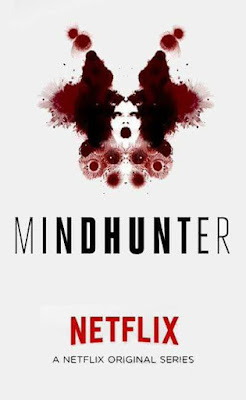 For my Sunday evening viewing I decided to check out the new Netflix original movie GERALD'S GAME, an adaptation of the 1992 Stephen King novel. Directed by Mike Flanagan, the film has a deceptively simple premise: a woman and her somewhat older husband (played by Carla Gugino and Bruce Greenwood respectively) take off for a retreat at their isolated holiday home, where they hope to work on their relationship and spice up their sex life a little. Unfortunately, not long after arriving, the husband handcuffs his wife to the bed, pops a Viagra, and attempts to act out his secret rape fantasy, only to keel over from a heart attack and die. Left alone, tied to the bed and with no phone or handcuff key within reach, and no hope of anyone stopping by for days, the wife’s mind starts to defragment in a wave of hallucinations and haunting flashbacks, while also having to deal with a hungry wild dog who makes periodical visits to chew on the remains of her husband (while the wife has to watch on, knowing she will be next unless she finds a way out of her predicament).
Good performances and a nice atmosphere of claustrophobia and mounting dread, along with a few moments that really made me squirm and cringe, make this a pretty decent adaptation that should please King devotees. 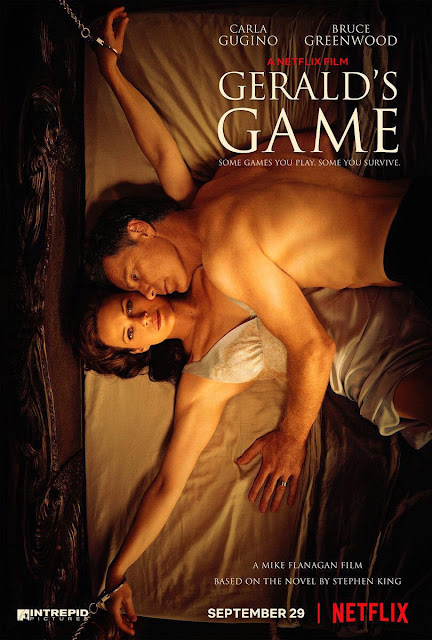 Posted by John Harrison at 5:03 AM