Another new addition to Netflix Australia which I highly recommend is LA 92, a recent (2017) feature-length documentary produced by National Geographic, which examines the incendiary racial riots and violence that occurred in the wake of the police beating of Rodney King and their subsequent clearing of the charges laid against them.
In Australia the King beating and the riots were big news, but there was still so much that I learnt from this riveting documentary, which is composed entirely of vintage news reports and amateur video footage shot by people caught up in the chaotic unrest. Brilliantly pieced together and combined with a powerfully effective score, LA 92 not only educates about its subject but puts you right in the midst of its terrifying whirlpool, which had clearly been simmering for years before the truly incomprehensible King decision (along with the earlier killing of African-American teenager Latasha Harlins by a Korean convenience store worker) forced the powder keg to ignite. 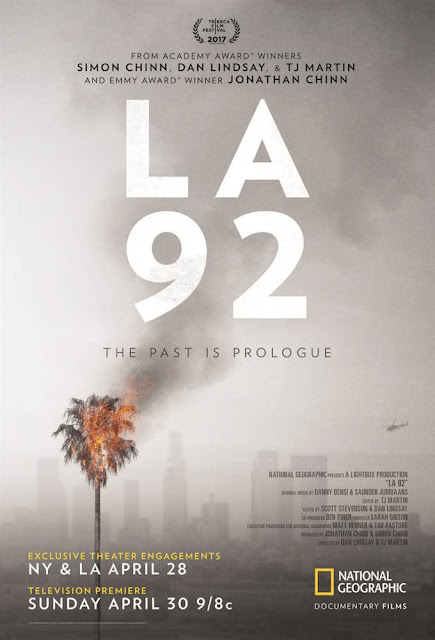 Posted by John Harrison at 4:06 PM

Alex Garland's ANNIHILATION (2018) is another beautifully cerebral, thought-provoking and at times terrifying science-fiction thriller from the writer/director of the brilliant EX MACHINA. It's a true reflection on the sad state of current cinema distribution that ANNIHILATION was deemed "not commercial enough" for threatrical screenings outside of the US. Instead it has gone straight to Netflix in Australia and is available to view right now, and is well-worth doing so asap. Led by stars Natalie Portman and Jennifer Jason Leigh, ANNIHILATION may not quite be the emotional stunner that EX MACHINA was, but it is totally seductive and gripping, a simple idea over which layers of complexity are slowly and effectively added. There's a few stunningly beautiful visual moments in the film that are composed like classic abstract and surreal paintings, not to mention a nail-biting monster attack that comes with an aural accompaniment that is truly unnerving. Delivering on its title, ANNIHILATION will wipe you out. 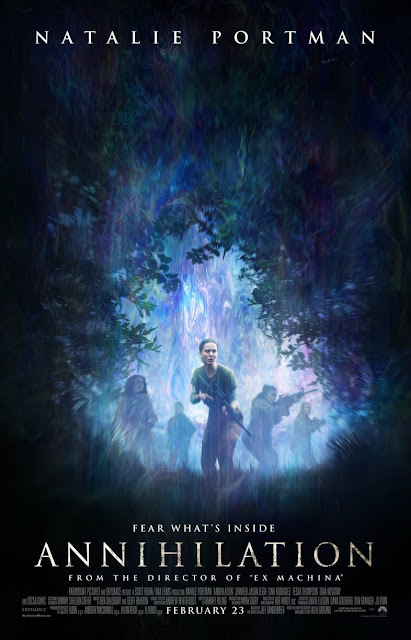 Posted by John Harrison at 4:05 PM

Another night, another of the new local Hammer Blu-rays given the once-over. Last night's title was SCARS OF DRACULA (1970), which I got up to watch at 2am as this always seems to be the hour when gothic Hammer is most effective to me (no doubt partly due to the fact that this was the time I first saw a lot of these films on TV when growing-up).
Produced at the same time as HORROR OF FRANKENSTEIN in order for the two films to share a double-bill, SCARS OF DRACULA is not only the worst of Hammer's DRACULA films starring Christopher Lee, but possibly the studio's worst vampire film, period. It is good to see Lee getting more screen time (and dialogue) than usual, but the absence of Peter Cushing's Van Helsing is sorely felt, and the cheaper than usual production values (brick castle walls that wobble when bumped, rubber knives that bend when hitting skin, clearly fake vampire bats) are even more obvious in hi-def. And the mod hairdos on young male stars Dennis Waterman and Christopher Matthews make the characters better suited for the modern-day follow up DRACUL A.D. 1972 than a period gothic piece. And I can't help but hear the Benny Hill theme tune play when Bob Todd turns up as the Burgomaster.
On the plus side, one-time Doctor Who Patrick Troughton is great as Klove, Dracula's servant, and its nice to see Hammer regular Michael Ripper getting more scenes than usual (as the tavern landlord, of course). Dracula's death by lightning strike is also different and effective (despite the obvious rubber Chris Lee mask on the burning stuntman), and the film is surprisingly graphic thanks to the studio taking advantage of the recent change in the British X certificate (which raised the minimum viewing age from 16 to 18). The TV version I grew-up with on Channel 9 was clearly cut to ribbons. The Hammer glamour quota in SCARS OF DRACULA is filled by Jenny Hanley, Anouska Hempel and Wendy Hamilton. 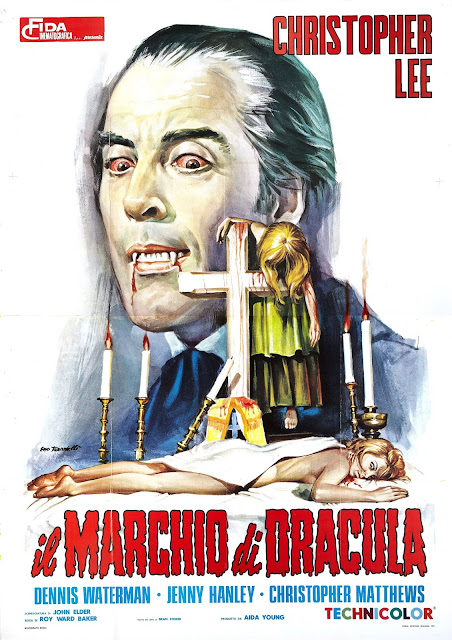 Despite numerous attempts over the years, I have never really been able to connect with Seth Holt's BLOOD FROM THE MUMMY'S TOMB (1971). In fact, other than Terrence Fisher's masterful THE MUMMY (1959) I have found all of Hammer's mummy flicks to be somewhat underwhelming and lacking, certainly in comparison to the studio's other great gothic (and modern) horrors. Unfortunately last night's viewing of the new local Blu-ray release of BLOOD FROM THE MUMMY'S TOMB has done little to alter my view of the film. Based on Bram Stoker's novel THE JEWEL OF THE SEVEN STARS, the film certainly looks beautiful and lush, has a fine score by Tristram Cary, and atmosphere oozing from almost every pore. It presents an interesting take on the traditional mummy themes, and Valerie Leon looks absolutely ethereal in her dual role as Margaret Fuchs/Queen Tera, but it's just one of those movies where its whole does not reflect or do justice to its wonderful individual elements. It's also a movie whose production was beset by personal tragedy - original star Peter Cushing had to drop out after only three days filming due to the illness of his beloved wife, and director Seth Holt died at the age of only 48 while the film was still one week away from the completion of filming (Michael Carreras overseeing the completion of the film). 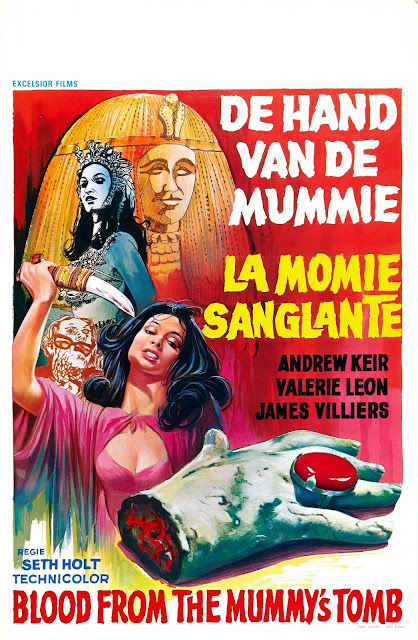 Really enjoyed a recent viewing of the new local Blu-ray release of HORROR OF FRANKENSTEIN (1970). It cops a lot of flack from Hammer fans, and it's understandable why, with its more comedic and saucy take on the classic gothic horror story. But it was the first Hammer horror film I ever saw, and it did its job of scaring the heck out of me on late-night TV when I was a kid. Ralph Bates is not the Victor Frankenstein that Peter Cushing was but he was a good actor who died far too young and I loved his take on the character here. He gets great support too from Jon Finch and Dennis Price as the creepy, jovial graverobber who loves his job, and Dave Prowse as the bald, muscle-bound monster. I've always loved the way film ends so abruptly and on such a blackly comedic note, and of course there is the usual dose of lovely Hammer glamour in the form of Veronica Carlson and Kate O'Mara. Not classic Hammer by any stretch but a very entertaining and different take on the subject and a clear indication of just how much Hammer were struggling to stay afloat and relevant as the 1970s dawned. 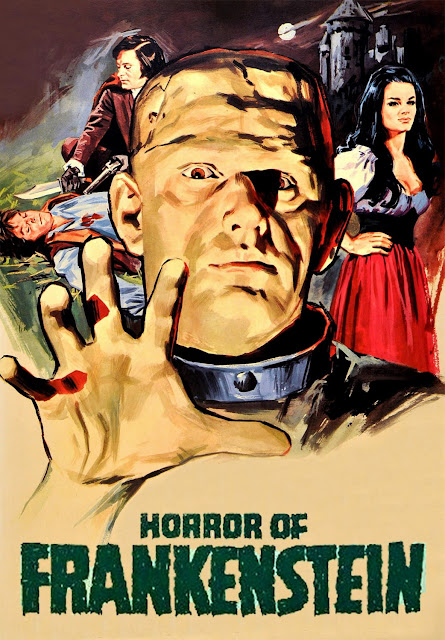 My article looking at 1950's Universal Studios genre movie posters and their often-stunning art has now been posted over at the Diabolique website. You can read the piece by clicking the link below. 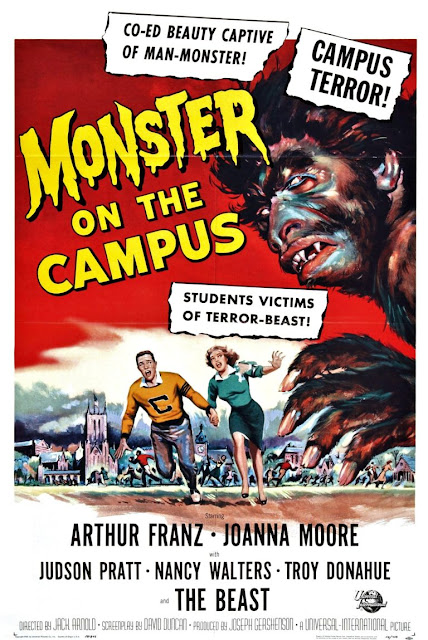 Posted by John Harrison at 1:00 AM