WHEN YOU COMIN’ BACK, RED RYDER


Based on a stage play by Mark Medoff (who also penned the screenplay for this cinematic adaptation), When You Comin’ Back, Red Ryder is a hard film to categorise. Social commentary, psychological thriller, dark character study, seedy grindhouse exploitation film - all of these are applicable, yet none of them seem wholly suitable. I first stumbled across the film on late-night television in the mid-1980s and was instantly captivated and seduced by it, sparking off a fascination with that only increased with time and multiple viewings (when I didn’t have a VCR, I’d book a media booth at Swinburne University and watch it there with headphones instead of going to class).

Set amongst the grim, depressing surroundings of a small New Mexico border town during the dying days of the 1960s, When You Comin’ Back, Red Ryder casts Marjoe Gortner as Teddy, a Vietnam vet who takes out his violent frustrations, and unleashes all of his inner demons, on virtually anyone who crosses his path. Accompanied by his hippy chick girlfriend Cheryl (cult favourite Candy Clark), who is always being driven to her wits’ end by Teddy’s disturbing behaviour, he rips off a quantity of cocaine from two Mexican drug dealers and hightails it back over the border, where he seeks refuge in a greasy roadside diner.

Holed up while he waits for his broken down VW van to be repaired, Teddy decides to amuse himself by torturing - first psychologically, then physically - the inhabitants of the diner: Angel (the plump, naive waitress), Stephen ‘Red’ Ryder (the sour, angry night cook desperate to escape his stifling world), Lyle (the stroke-addled owner of the motel/gas station next to the diner) and Richard and Clarisse Ethridge (the repressed upper middle class couple who are passing through on their way to a concerto).

At first little more than an annoying, insensitive nuisance, Teddy’s behaviour becomes increasingly more mean spirited and violent, until he finally holds his unwitting audience in a grip of sheer terror and pleading for their lives. By the end of the film, however, Teddy emerges almost as some kind of cathartic angel (though this interpretation is certainly open to debate, and there is an element of ambiguity to the ending). Prior to his arrival, all of the characters at the diner are portrayed as either lost, weak or tired souls, all unhappy and yearning for something else but lacking the courage to break out and reach for it. By Teddy breaking down their will and forcing them to face their own frailties and self-truths, they (at least, Angel and Red) ultimately emerge stronger for their ordeal, and ready to face the future with renewed confidence and honesty.

Despite its theatrical elements (the film’s stage origins are certainly reflected here), When You Comin’ Back, Red Ryder is full of memorable moments and passages of protracted tension and suspense, with director Milton Katselas (Butterflies are Free, Report to the Commissioner) making great use of the confined diner setting - where the majority of the film takes place - to create an effectively stifling and claustrophobic ambience. (Trivia - Milton Katselas was played by James Franco in Sal, the 2011 biopic of murdered actor Sal Mineo, which Franco also directed).

Without doubt, the strongest element of When You Comin’ Back, Red Ryder, and the glue which holds the whole film together, is the galvanising performance of Marjoe Gortner as Teddy. Gortner (who also served as producer on the film) was one of the more interesting exploitation personalities of the 1970s, a former child evangelist and, at age four, the youngest-known ordained minister. After spending his teenage and young adult years living the typical counterculture lifestyle of the day, he returned to the revival tent circuit in the late-sixties, modelling his new flamboyant stage routines on Mick Jagger. In 1972, Gortner and his pioneer preaching ways became the subject of the rivetting, Oscar-winning documentary Marjoe, in which Gortner, supposedly feeling remorse over his manipulation and swindling of vulnerable people in the past, allowed the filmmakers to utilise hidden cameras to expose the oft-suspected truth about evangelism, the tricks and cons used to whip people up and get them to gladly empty their pockets, and the feeling of emptiness he’d have inside him afterwards (though he admits that the guilt faded whenever his wallet grew lighter).

Whether his motives were genuine or not, Gortner used the success and controversy generated by Marjoe (many theatres in the Bible Belt refused to screen it, fearing the outrage it might cause) to launch both an acting and singing career. While his singing career stalled after one album (1972's Bad But Not Evil), Marjoe’s thick shock of curly, dirty-blonde hair, muscular physique and piercing blue eyes, made him a strong and charismatic screen presence, which was put to good use in films like Earthquake (1974), Food of the Gods and Bobby Joe & the Outlaw (both from 1976, and the later being infamous as the film in which TV’s Wonder Woman, Lynda Carter, revealed her impressive assets). Gortner was also in the tacky Evel Knieval biopic Viva Knieval! (1977, starring Evel as his Christ-like self) and Luigi Cozzi’s psychedelic Italian space opera Star Crash (1979, also starring David Hasselhoff and Caroline Munro, another famous 1970s glamour gal).

Unfortunately, Marjoe never got another opportunity to display the sort of raw intensity and sheer dominance which he showed in When You Comin’ Back, Red Ryder, with his subsequent career confined to roles in mostly low-budget and direct-to-video fare like Mausoleum (1983), Jungle Warriors (1984), American Ninja III: Bloodhunt (1989), and on television shows like Circus of the Stars. His most recent performance was a brief turn (appropriately enough, as a preacher) in Walter Hill’s 1995 western Wild Bill. There can be little doubt that Marjoe utilised many of the tricks of body language, voice projection and eye contact that he employed as a preacher to bring Teddy to life with the depth that he does.

While it is Gortner who clearly dominates the film, When You Comin’ Back, Red Ryder also boasts a very fine supporting cast, including the previously noted Candy Clark (The Man Who Fell to Earth and the 1988 remake of The Blob), Hal Linden (best known as the lead on the long-running sit-com Barney Miller) and a magnificent Lee Grant (familiar to fans of 1970s studio genre films through her work in Airport ‘77, The Swarm and Damien: Omen II). There’s also Pat Hingle (a veteran of several Clint Eastwood films and Commissioner Gordon in the 1990s Batman movies) and Bill McKinney (so good in 1967's She-Freak but best known as the creepy hillbilly who rode poor Ned Beatty into the mud and made him “Squeal like a pig” in 1972's Deliverance). Relative unknowns Stephanie Faracy and Peter Firth hold their own amongst this strong ensemble, and as Angel and Red Ryder respectively have some strong scenes and a great chemistry together.

Filmed in El Paso, cinematographer Jules Brenner really catches the grimy roadside diner ambience, as well as the heat and barren dustiness of the external locations, and a genuine feel of Small Town, USA (Brenner also photographed the 1970s TV mini-series Helter Skelter and Salem's Lot, as well as the classic 1984 horror/comedy The Return of the Living Dead). The film also has a terrific soundtrack featuring cuts by The Doors, Tammy Wynette, B.B. King, Hugo Montenegro and others. Soundtrack licensing issues are supposedly the reason why When You Comin’ Back, Red Ryder has never seen release on DVD or Blu-ray. The film did appear on home video in the 1980s in some countries (including a rare release in Australia on the Roadshow label), and DVD-R burns of these VHS releases can be found for sale or in trading circles, but hopefully one day the film will be given the treatment and respect which it deserves. Along with Stanley Kramer’s Bless the Beasts & Children (1971), it’s one of the great unsung - and currently unavailable - pieces of American cinema of the 1970s.

(Note: the above piece was previously published, in a slightly different version, in the Is it...Uncut Special Edition #2, published in the UK in 2003). 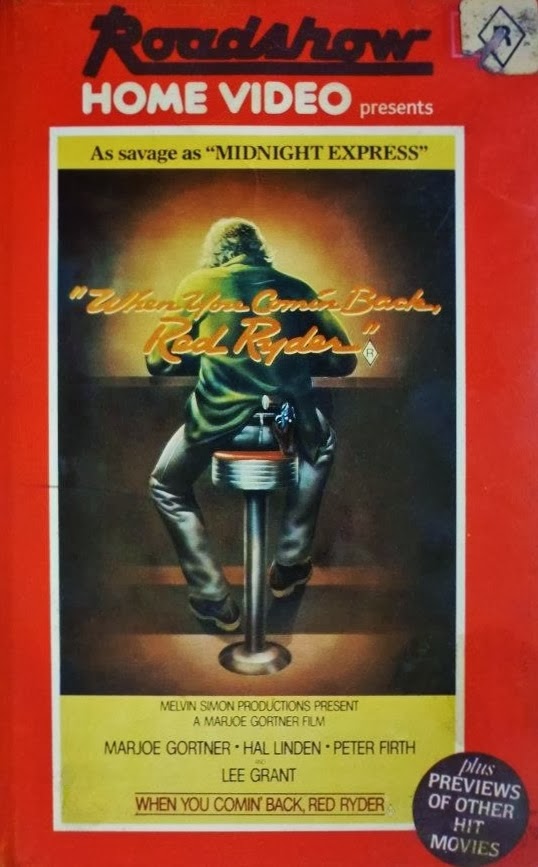 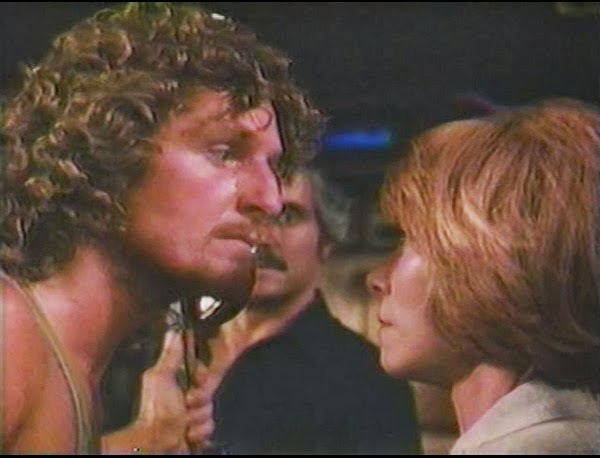 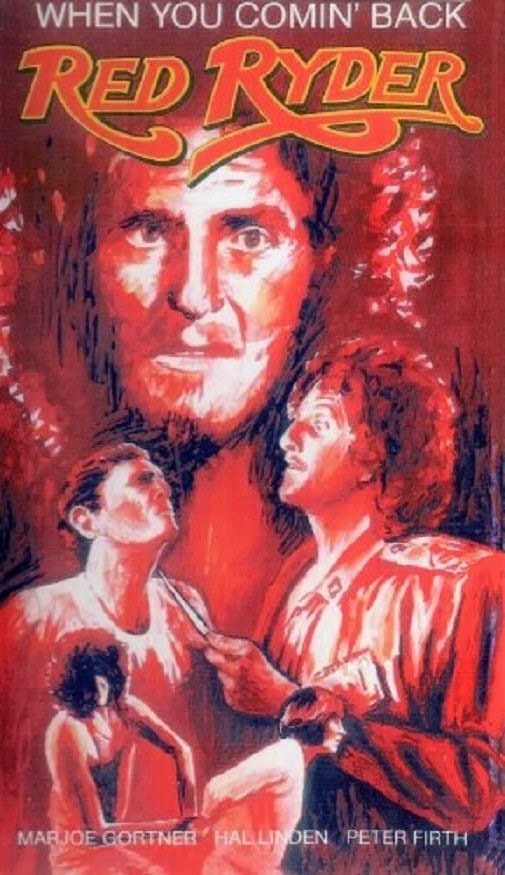